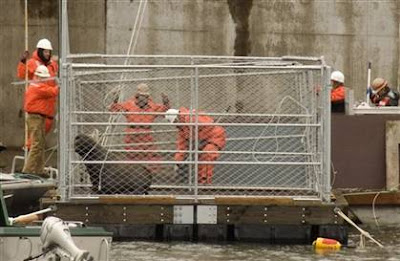 By now you're probably saying, "not another twist to that mysterious dead seal case up in Oregon!".

At least that was our take this morning when word came out the 6 seals died of...heat exhaustion, not gun shot wounds as was reported earlier.

Why does this matter? Politics. Water politics, salmon politics, resource politics, and the grandaddy of them all the news media.

So here it is, until someone else says something different, which in this very unlikely case of 6 dead seals-is likely to be the case:


On Wednesday, NOAA's National Marine Fisheries Service said the sea lions had died of heat prostration. Officials say more conclusive results should be available in another 10 days, once tissue sample studies are completed.

The investigation into the deceased sea lions remains open.

This mornings news from San Diego also included this article about white sharks. In the aftermath of a recent shark attack near here this piece serves as a critical look at the myths and biology of the great white shark.

Overall the reporting is fair-if not "glossy".

Peter Benchley once said he could not have written “Jaws,” his best-selling 1974 novel about a giant white shark terrorizing a New England beach town, if he knew then what he later learned.
“When I wrote 'Jaws,' I really didn't know much about sharks,” Benchley said in 2002. “There wasn't a lot of material about them.”

These days, much more is known about white sharks. (The “great” is a misnomer. It's not part of the species' traditional or scientific name.) Benchley, who died in 2006, came to be an ardent advocate of stronger efforts to protect and understand sharks.

Click link for complete article.
Posted by Horizon Charters Guadalupe Cage Diving at 11:02 AM No comments:

Mexico and the Sharks of Ecotourism Frontera NorteSur 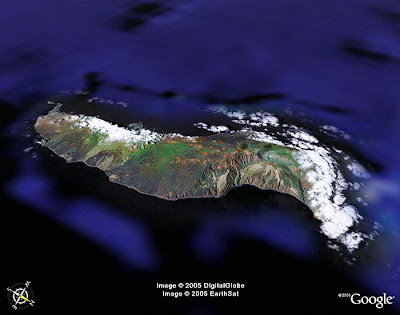 Due to the actions of one operation at Isla Guadalupe, Mexico-many within the government of Mexico are now asking if shark diving activities at this site are in anyones best interests.

The following article from Mexico's "La Jornada" details a full cage breach event (one of the worst ever caught on tape) at Isla Guadalupe, November 2007.

This video, shot by clients of the operation in question was quickly posted to You Tube where it has been viewed over 120,000 times. Presumably by Mexican environmentalists and policy makers as well.

Many in the environmentalist community and anti-shark diving lobby within Mexico are using this video and this singular event as a "raison d’être" for everything bad about cage diving within Mexico. One look at the video and you can understand why.

This video continues to overshadow the ongoing "laundry list" of positive steps taken by eco tour operators in good faith at this site. From donations of building material, boat engines, fuel, food and medicine, to the full support of Mexican lead white shark tagging and research.

It is high time those responsible for this event-step forward and take full responsibility for their actions of last November 2007. That means the following:

1. An open letter to the Mexican government posted to major newspapers and a full apology

2. A self imposed fine with funds being turned over to the new Bio-Sphere for enforcement activities

3. The removal of this video from You Tube. Its continued presence serves only to misinform and provide an incomplete look at the many thousands of hours of safe and eco minded shark diving that has been done at this pristine site.

Without steps taken now to mitigate the media and perceptional damage done to the entire white shark eco tour fleet, Isla Guadalupe and those who would see all shark diving activities at this site stopped is becoming a very real possibility:
and the Sharks of Ecotourism Frontera NorteSur

In and other Mexican coastal states, ecotourism is promoted as an answer to declining resource-based economies and old school sun and surf-style visitation packages. Within the ecotourism sector, extreme sports activities are one variation of attractions designed to lure the dollars of affluent foreigners and Mexicans. But one form of extreme ecotourism, cage diving with sharks, is raising questions about the management of 's natural resources as well as the safety and integrity of both humans and animals.

A remote chunk of land off the Pacific Coast of Baja California, Guadalupe Island is a hot spot for shark cage diving. Every year one hundred or more great white sharks gather near the island, likely drawn by Guadalupe's tasty seals. In April 2005, was declared a protected biosphere reserve by the federal Mexican government. However, the reserve lacks governmental or medical facilities.

's lack of infrastructure hasn't stopped several San Diego-based tour operators from offering adrenaline-spiked encounters with the magnificent if potentially deadly great white sharks. Running expeditions from the of , , tour boats ferry as many as 22 people on shark-seeing adventures. Advertised on the Internet, five or seven-day packages range from $2,750 to $4,295 in price. Once near the island, tourists don diving gear and are then put into cages from where they observe great whites swimming near the enclosures. The circling sharks are attracted by bait, usually tuna, dangled from a line.

According to Mexican environmentalist and columnist Ivan Restrepo, a November 4 trip crossed the line in keeping sharks and people at safe distances. Restrepo reported in a recent column that a great white shark snagged itself on a cage which contained two tourists, ripping apart an entire section of the "barrier." Luckily, the two thrill-seeking tourists, who presumably got their money's worth, escaped harm.

Restrepo said a previous pilot study conducted by Dr. Jose L. Castillo Geniz, a researcher with Mexico's Regional Fisheries Research Center of Ensenada, resulted in recommendations to tour operators about where to place the bait and how to keep a prudent distance from the sharks.

"(Tour operators) promised to do it, but nothing more," Restrepo charged. "The lives of tourists and sharks continue being at risk."

The incident reported by Restrepo once again raised questions about the possible impacts of ecotourism on wild animals. Whale-watching, for instance, is an economic plus for coastal residents in , and other areas, but the popular activity poses important questions. When does the number of boats viewing animals reach a saturation level? How close is a safe distance from an animal? How do human-animal interactions alter the natural breeding, migratory and other patterns of wild species?

According to Restrepo, 's shark tourism brings in about $3 million per year for the tour operators, who pay nominal permit fees to 's Ministry of Natural Resources and the Environment.

"The business of taking tourists to watch white sharks on is an excellent one for a small group from the neighboring country," Restrepo wrote, "but not for the natural reserve, which lacks resources to establish a management plan, sponsor research or pay its personnel better…."

On the other hand, tour operators maintain that their excursions help shield protected great white sharks from poachers, who hunt the endangered creatures for the lucrative global fin market. Recent reports estimate that the worldwide population of great white sharks has declined by as much as 70-90 percent. A group of shark-watching tour operators has established the non-profit Guadalupe Island Conservation Fund to raise money for the preservation of the local shark population.

"Great whites are listed as endangered in ; however there are no resources to dispatch park rangers in small enforcement vessels to protect them," said a statement from the Fund posted on its website.

Experts regard closer US-Mexico collaboration as essential for preserving the great white shark, which is an international traveler of excellence. After tagging a male great white shark with an electronic tracking device in early 2007, a cross-border team of researchers released the young predator into the ocean from the privately-owned Monterey Bay Aquarium in north-central . Months later, the shark surfaced off the southern coast of near Cabo San Lucas.

"It clearly shows that like many migratory animals, sharks don't recognize international boundaries," said Dr. Salvador Jorgensen, a researcher with the Monterey Bay Aquarium and Hopkins Marine Station. "It underscores how important it is to work closely with our Mexican colleagues to make sure we have adequate protection for the species," Jorgensen told a newspaper.

Posted by Horizon Charters Guadalupe Cage Diving at 7:14 AM 2 comments: