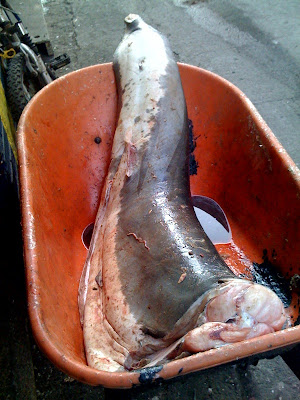 Da Shark has dug up some fine reading by some well known names in the research community on artisanal elasmobranch fishing pressure in Baja.

This is just flat out good stuff.

As we have been blogging about for the past two years at least one species, the Great White, is under threat from regional long line and gill net fishermen.

Back to the paper:

Artisanal fisheries account for up to 80% of elasmobranch fishing activity in Mexican waters, yet details associated with fishing effort and species composition are generally unavailable. This paper describes a survey of the artisanal elasmobranch fishery of the Pacific coast of Baja California, Mexico from 2006 to 2008. The objectives were to determine the geographic extent, size, and targets of the artisanal fishery, and to describe the catch characteristics at Laguna Manuela, an artisanal camp where elasmobranchs are the primary target. For the latter, we used a combination of beach surveys and a novel survey method involving the identification of discarded carcasses. Forty-four artisanal fishing camps were identified, of which 29 (66%) targeted elasmobranchs at least seasonally, using primarily bottom-set gillnets and longlines. At Laguna Manuela 25 species of elasmobranchs were documented. Gillnetting accounted for 60% of fishing effort, and the most commonly captured species were Rhinobatos productus, Zapteryx exasperata, and Myliobatis californica. Longline fishing accounted for 31% of fishing effort, and the most commonly captured species were Prionace glauca and Isurus oxyrhinchus. Catch was composed of mainly juveniles for many species, indicating that the immediately surrounding area (Bahia Sebastian Vizcaino) may be an important elasmobranch nursery habitat. The results of this study will serve as a baseline for determining future changes in the artisanal fishery, as well as changes in species demography and abundance. 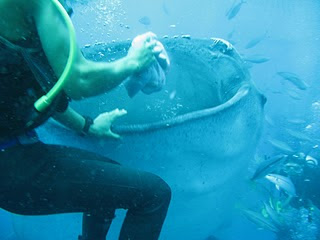 Got the following image sent to us this week.

It would appear that this is a diver hand feeding a Whale shark (Rhincodon typus), or maybe not as we always assumed to hand feed a Whale shark you would need a pair of tweezers (see diet).

Upon further investigation this might actually be a Whale shark being hand fed "something" as this image was shot in Okinawa, Japan at the site of two (didn't it used to be three?) penned and beat up looking sharks.

The additional images we found show what appear to be net damage from rubbing to the eyes and maxillofacial areas on both animals.