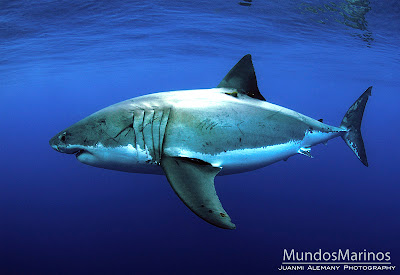 With just a few weeks until our 2011 white shark season at Isla Guadalupe celebrating a decade of successful operations on site we're pulling some old and not so old trip reports written by our divers so you can start getting excited.

When Drew Grgich called us many months ago to book a shark diving adventure we knew we had a budding Shark Diver on the line.

His enthusiasm for sharks you could "feel" all the way from Arizona.

He was also a non certified diver, one of the many we "train" to become Shark Divers each and every season.

Today Drew can call himself an Official Shark Diver having encountered the top shark species at the best site for them on the entire planet.

Day One (and a half)

We came from all over - - Michigan, New Jersey, Nebraska, the Bay Area, Vancouver, Maryland, and Arizona - - and all of us had one goal in mind … swimming with Great Whites. Mind you, none of us had death wishes so our goal was to do this swimming carefully ensconced in a steel cage. Nonetheless, we would be in the water with them and thus, they would be in the water with us! Our journey began in San Diego out of H&M Landing. Our vessel was the MW Horizon, an 88-ft. dive boat.

We boarded at about 10:30pm and were underway just after midnight. The first night was spent in fitful sleep while trying to detect whether or not the queasy feeling in our stomachs was the beginning of seasickness or just nerves. We arrived in Ensenada the next morning at around 9am. A quick check with Mexican customs officials sent us on our way to Isla Guadalupe, the fall home of some 100+ Great White sharks. The trip was uneventful if long - - 18 hours long to be exact. We were told that the ride was among the smoothest our captain had experienced. A few of us succumbed to seasickness but for the most part, all was well. We saw some remarkable sights - a blue whale, a thin whale, pods of fast moving and high jumping dolphins.

What I remember most about that day is how excited I was.

Few people in life are blessed with the sure knowledge of knowing exactly what they want most in life and even fewer get to experience that desire. For me, my most fervent wish was going to happen in a matter of hours. That's pretty heady stuff!

At around 3am, the engine shut off when we arrived at our destination. I went up top a couple of hours later and was not surprised to see other early risers. We attempted to wrestle our cameras into taking decent photos - - not an easy feat at 5am before the sun had even made a token appearance - - and imagined that the murky waters surrounding us were teeming with sharks, each hungry for the first shift of divers.

The shift happened to include me!

Our divemaster, Martin Graf, took me into the cage and had me try a regulator for the first time. I did okay with the regulator but before Martin would declare me dive-worthy, I had to flood my mask and clear it through my nose. I gave it a good effort but sadly, I panicked when my first attempt resulted in a nose full of salt water. I shot to the surface and for a brief moment, wondered if I was going to be able to succeed. Martin was extremely patient and knew exactly how much space to give me in to get over my fears. My second attempt was successful. The secret was to get a steady rhythm breathing through my mouth to gain confidence, close my eyes, and exhale through my nose while tipping the mask.

We didn't have to wait long. The first Great White appeared within a few minutes, circling the cage a few feet below us in its graceful way. That shark was followed by another shortly behind. Both sharks hovered below and made lazy trips around the cages and all too soon, our first hour's rotation was over. All of us were fortunate on this trip. Two people had to cancel so this meant we had 10 divers instead of 12. The cages fit four people each. This meant that we could effectively have as much dive time as we wanted.

I took an extra shift that first day so I had five hours in the cages. We saw seven different sharks the first day. Most kept a respectable distance from the cage but some ventured close enough to touch if we were really inclined to do so. No one was. :) We knew that they were different sharks as the patterns of markings around their gills and fins serve as a sort of fingerprint. These sharks are in turn named by the people who first see them. Scientists do this so that they can identify populations and measure data points such as the number of years that they have been coming to the island, how much the sharks are growing, and how many sharks are seasonal residents.

Some come every year while some visit more irregularly. For the record, the sharks we saw on Day One were Jacques, Bite Face, the Russian, Johnny, Cris Cross, and a new unnamed male. We don't know who gets to name that shark . . . the suspense is delicious. :) The highlight of Day One -- aside from the fact that I was diving with Great Whites! -- was a rotation where Jacques circled the cage for the entire hour. I was able to shoot forty minutes of video going from one side of the cage to the other. Some passes were within inches of my video camera - - I got some great shots!

The next morning, I took the first rotation of the day along with two other brave souls. We saw some sharks but they were far below. We tried a variety of tricks to attract the shark's attention - - stomping our feet, hitting the cage ladder with some of our lead weights, singing show tunes - - but nothing enticed the sharks closer that first shift.

Following shifts were much more productive. I spent the first three hours of the day in the cages and shot more video. I grabbed another three shifts after lunch for a total of six hours in the cages. There were two highlights on day two. The first was that I happened to be looking in the exact direction necessary to witness a full breach. This is when the shark completely propels itself out of the water while in pursuit of prey. The prey happened to be a seagull and it got out of the way just in time to escape the leaping shark. I was one of two people onboard who saw the breach and it was truly a magnificent sight.

It was a smaller shark - - maybe 6-8 feet - - but it was a full breach!! The second highlight was more ignominious. We saw a new shark -- Gunther -- who was kind enough to - - - well, poop - - - directly in front of the cage next to us. It was amusing to see and pleased the 10-year old children inside my cage mate and I . . . until the current pulled us directly into it. I can thus say that I was blessed enough to be pooped on by a Great White.

I only took half of the sharkwatch shift. It was okay - - nothing really when compared to the first couple of days. I took two more shifts for the day before we had to leave. We did get a great couple of close passes by Bite Face and Jacques. This was especially memorable for me as Bite Face was a featured shark on Expedition Great White, a show about scientists tagging Great Whites at Isla Guadalupe. It was fun to see the satellite tags that they had attached to Bite Face to track him. It is also cool to know that if they show his progress in a future show, one of the lines will cross where I saw him. :)

We left for home following the morning drives and have a rough patch of choppy water to look forward to. I'm writing this as we make our slow way north across the Pacific. I can honestly say that there are four events in my life that top my list. The first would be my wedding with really, a tied two and three being the births of my kids. Close behind would be this trip. I was a little worried that I'd be petrified of going into the water with the sharks but I didn't have even a lick of fear. The sharks are obviously curious about we monkey folks in the cage - why would they stick around if they weren't?

They certainly did not make any attempts to harm us and I didn't hesitate to hang my arms out of the cage to hold my camera for a better picture. That said, I wasn't stupid - - - no dangling legs over the side of the cage, for example.

My favorite Martin Graf quote - Sharks are like babies. There are only two types of items to a shark -- things that fit in their mouth and things that might.
Posted by Horizon Charters Guadalupe Cage Diving at 9:29 AM No comments: 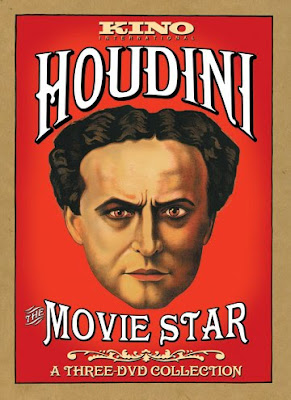 As the Caribbean reels from an onslaught of invasive Lionfish, we took a great idea from Scotty Grey owner of the M/V Kate and Blue Iguana Charters based in Florida and had some fun with it.

The basic concept behind any successful invasive species culling effort is to create a marketplace for the species. It's not a new idea, and it's one that's been floating around for a while now.

Watching the reaction to our post on Facebook and within the dive industry was telling. Overwhelmingly folks got it, unfortunately LionErects TM is just an idea.

Which gets us to an earlier post about shark conservations need for funding, and the idea of generating funds not seeking funds.

We can do this.

Tapping into established markets is an easy proposition and one that allows entities to enjoy long running revenue bases to work from.

In a perfect world the profits from one conservation effort fuels another.

LionErects TM is the perfect idea and business model to tackle a fish species that is devastating entire reef systems throughout the Caribbean. The other option is for some NGO to seek funds so they can pay fishermen to harvest lionfish with no real or lasting market incentive to do so.

Which model do you think will ultimately be successful in culling the lionfish invasion?

It's not magic folks. It's just business. Conservation needs to become engaged in the business world soon, or forever be on the back burner. We can only get so far with the programs in play today.

Tomorrow's answer to conservation will look a lot different.
Posted by Horizon Charters Guadalupe Cage Diving at 8:52 AM