The Face of Commercial Shark Fisheries 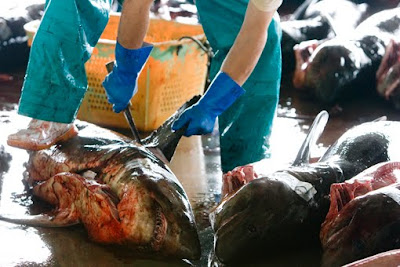 Kudos to photographer Alex Hofford for documenting the commercial shark fishery in Japan.

As to his image and video expose of Japan's involvement with sharks?

Why are folks getting so riled about this?

Aside from the obvious, yes this is a commercial shark fishery. This is what it looks like.

Let's delve into what's being done about it specifically on the money side.

The shark conservation world does not have the money it needs to effect conservation change. Unlike the fisheries side which has millions at its disposal. Millions generated daily with scenes like these.

For the most part the shark conservation movement is still running with non budgets that limit most efforts trying to stop the shark crises. Fund raising strategies that are governed by three sad, worn out, and laughable tactics:

2. Sales of plush toys and T-shirts at dive shows.

That's it. This is how we fund the global push back to a multi million dollar industry with well established trade agreements, partners, and the ability to modify conservation efforts like CITES - at will.

If the recent CITES debacle was not a global wake up call to conservationists, then I fear image and video exposes like Alex's will do no better.

Still, shark groups sprout up every single day with great ideas and conservation goals, stymied by lack of funding. This has lead to the reliance on "The Petition." As French serfs were to 15th century Feudal Lords (who were also presented with petitions), the conservation movement sends shark petitions out for just about everything these days.

Last week I was asked by nine different groups circulating four petitions to help save sharks. The week prior it was six petitions. While I am certain at least one petition has made a difference in my decade long inundation with these well meaning requests, I know of many more that have been discounted and left by the wayside by those with the power to effect real and lasting conservation change.

As the French peasantry discovered in the late 17th century, it takes a revolution, not a petition to effect change. The shark conservation movements revolution will be lead by those who develop strategies for long term conservation funding that deliver uninterrupted funds.

Funding is the key to saving sharks.

Until that time, until conservationists can match, dollar for dollar, the kind of unrivaled commerce with sharks we saw coming out of Japan this week, we will remain angry with the images, frustrated with CITES, and witness to the global decline of a magnificent species.

Oh, and we started our own petition this week, if you want to sign it.

SharkDiver is the journey of a scientist training his mind and body to adapt and be ready for a life threatening dive with Great White Sharks. We’re dealing with real people and real events, to ensure a smooth, engaging flow ‘SharkDiver’ will follow a structured treatment as Luke trains and learns each lesson. Intentionally lacking a formalistic script I allow the characters full freedom to use their own words. They’re experts who know the subject matter better than we can script.

To engage the audience I’m adapting a proven technique from similar documentary dramas, the same technique which made ‘OWNED’ an award winning film. I use three shoulder-mounted cameras, blocking through each scene multiple times with different camera angles to capture moments missed through traditional ‘camera on sticks’ style. Unaware of the cameras position the characters are free to feel their character. While the hand/shoulder held ‘shaky camera’ may seem trivial, a simple look at the first 5 minutes of Saving Private Ryan stands as testament to the emotion that may be conveyed through camera style.

In ‘SharkDiver’ I create a stark contrast between the presumably safe environment above the water and the traditionally dangerous water scenes. Paradoxically the surface style will evoke an almost claustrophobic state of mind, causing an edginess in the audience until we dive underwater where we switch to longer cuts and smoother pans, soothing the audience while in reality Luke’s risking life and limb to follow his dream. Subliminally the audience will experience an increasing comfort level underwater while in the presence of sharks, a message that will promote our goal of conservation and education of the aquatic realm and it’s Apex Predators.