Good news for sharks off the east coast of the USA about a comprehensive closure of commercial shark fishing species.

But is it too little too late?

The National Marine Fisheries Service closed the Atlantic commercial fishery for non-sandbar large coastal sharks on July 1, after catches in the first half of the year met the weight quota for 2009. The closure -- which includes all state and federal waters from Maine to Florida -- applies to silky, tiger, blacktip, spinner, bull, lemon, nurse, scalloped hammerheads, great hammerhead and smooth hammerhead sharks.

Shark species not listed, such as mako and thresher, can still be landed.

However, Mike Luisi, deputy assistant director of the Maryland Department of Natural Resources, said the closure would not have much effect on local fishermen. 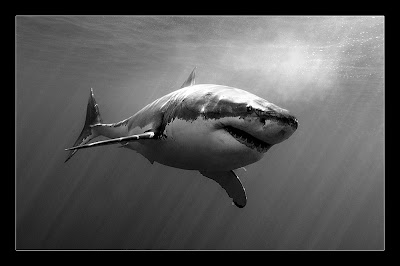 San Onofre State Beach -- On June 7, 2009 Kevin Rust and several unidentified companions were surfing North of Old Man's, San Onofre State Beach. Air and water temperatures were estimated in the mid-70s and 60s Fahrenheit, respectively. The sky was clear with a mild 1 - 2 knot North-West breeze. It was 7:30 PM and they had been on the water about 2.5 hours. Several Dolphins were observed in the area prior to the encounter. The ocean was glassy calm going to high tied with 2 - 3 foot waves. The water was 8 - 10 feet deep with a primarily rocky ocean floor and some scattered vegetation. Rust recalled; "A few friends and I had been surfing for about 2.5 hours just a peak or so North of Old Man's peak at the San Onofre State Beach, along with the 40 or so other people there at the time. We were sitting in the line up about 100 yards off shore around 7:30 when a 4 - 5 foot Great White Shark jumped out of the water. It was about 50 feet away, farther out. It leaped about 3 feet into the air, came completely out of the water with its belly facing us, and crashed down ungracefully on its side. The belly was white, vertical tail, and a v-ed nose. No one really panicked. It was more awe factor than anything. We just pulled our hands and feet out of the water, made a couple straggler jokes, and that was that. It never resurfaced or made another appearance. I read Redmond's encounter for July 7, and it was the same circumstances, behavior etc., just 5.5 hours later. Same spot, I'll bet even the same shark." Please report any shark sighting, encounter, or attack to the Shark Research Committee.

San Onofre State Beach -- On June 7, 2009 Rudy Fontes was surfing at 'The Point ,' San Onofre State Beach. It was 7:15 - 7:30 PM and he had been on the water about 90 minutes. The water was 8 - 10 feet deep with a cobblestone reef bottom and an estimated temperature of 65 degrees Fahrenheit. The sky was clear with a light breeze and a air temperature in the mid-70s Fahrenheit. The ocean was glassy calm with a 3 - 4 foot swell. Fontes reported; "I had been surfing, but was now waiting in the line-up, maybe 100 yards off shore, between sets and looking out to the horizon. There were maybe a dozen others within 30 yards of me when an estimated 6 foot White Shark hit the surface of the water and became completely air borne above the water, maybe 5 feet above the surface. Its belly was facing all of us and you could see the shape of its mouth (jaw) very clearly. It was moving wildly as if it was attacking a fish or something from below the surface. an awesome site and we were all 'buzzzzing' for a while, never seen that before. I guess it swam off, that was the last of it." Please report any shark sighting, encounter, or attack to the Shark Research Committee.

San Onofre State Beach -- On July 7, 2009 Parker Redmond was surfing 'The Point' at San Onofre. It was 2:00 PM and he had been on the water about 10 minutes. Air and water temperatures were estimated in the low 70s and 60s Fahrenheit respectively. The sea was 'choppy' with a 2 - 4 foot South swell. Redmond recalled; " I was looking off towards Lowers and saw a 4 - 5 foot White Shark leap about 4 feet out of the water. Its tail was inverted just like the Discovery Channel sharks. I knew instantly what I had seen. It had a white underbelly and its back was grey. About 20 minutes after the shark breach 2 Dolphins cruised through the line-up. That made my encounter seem even more absurd, but I promise you it was definitely a White Shark." Please report any shark sighting, encounter, or attack to the Shark Research Committee. 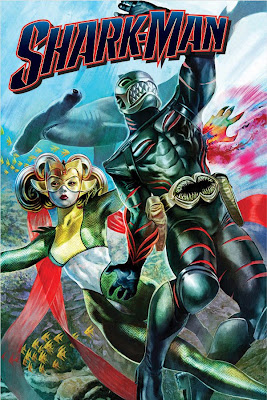 Posted by Horizon Charters Guadalupe Cage Diving at 9:42 AM 5 comments: