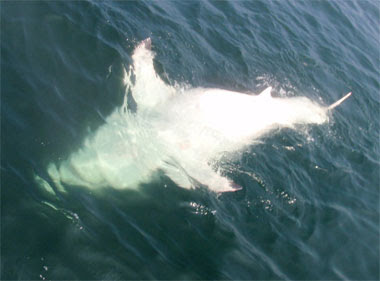 News came in last week of a "sleeping white shark" found upside down on the surface off the coast of Chatham by local fishermen.

When touched with a gaff the critter suddenly sprang to life swimming off into the depths.

We, on the other hand, might suggest what the fishermen found was a gravely ill female shark with what looks like a seriously distended belly.

Perhaps from a recent whale meal, or a blockage in its stomach that caused gas build up.

"Peering through the afternoon fog late last month, the island charter-fishing captain assumed he was looking at the bloated white underbelly of a dead whale floating motionless seven yards away. But drawing closer, his eyes widened: The tail cut out of the water vertically, not flat like a whale’s."

Either way this is not normal for whites and hopefully this animal survived.