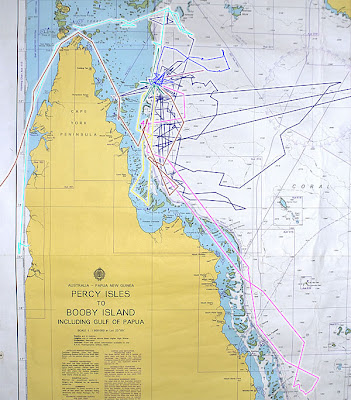 This is the sat tagging and tracking map (click for full size) of several Tiger sharks tagged and tracked in Australia courtesy of The Undersea Explorer Shark Research Program.

This project has been funded and conducted by Undersea Explorer through adventure diving tourism. Public awareness of shark conservation needs have been highlighted through the involvement of recreational divers and the production of international film documentaries and articles.

The experience of divers on these liveaboard diving adventures has been heightened by interaction with the scientists, quality interpretive presentations and exciting and unique shark diving.

When we covered the future of shark diving and commercial aquariums a few months ago this is not what we had in mind. Let's hope on some far off planet there's no alien equivalent to "eating sauteed red snapper in the middle of an aquarium"...then again an estimated 7 million people "vanish" from the planet each year, we may be there already:

GUATEMALA - Grupo Nais announces the December 3 opening of the Nais Aquarium, the First Restaurant-Aquarium in Latin America, in Guatemala City. A gastronomical and technological gem that astonishes with its complexity and beauty, the Nais Aquarium includes a group of 15 aquariums in the Restaurant, Lounge and family area. Measuring 12 x 6 meters and containing 30 thousand gallons of salt water, the main Aquarium is the largest Mobile Aquarium in the world, with 450 fish from 38 exotic species, including sharks, manta rays and eels.
Posted by Horizon Charters Guadalupe Cage Diving at 1:31 PM No comments: 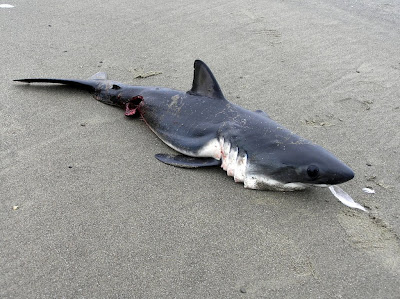 Salmon Shark young of the year have been washing up along the coasts of both California and Oregon over the past three years with increasing frequency. At least one "marine expert" thinks there's something fishy going on...we're not so sure:

Then came the young salmon sharks -- which resemble baby great whites -- turning up on the sand through October.

Now Bill Hanshumaker, a marine education specialist at the Hatfield Marine Science Center in Newport, wants to figure out why at least 10 or more of each species beached up on Oregon shores in the past several months. It's not unusual to find a few each summer, but this year's high numbers remain a mystery.

Posted by Horizon Charters Guadalupe Cage Diving at 10:24 AM 1 comment:

This mornings Times Online highlights the ongoing need for both control of media within a shark site and safety protocols with macro sharks. Back in 2007 this company had another full cage breach at Isla Guadalupe. This time the shark took off the entire front of the cage system dumping a fully weighted diver into 500 feet of water.

At the time the event was written off and to this day the operation publicly looks at this event as "par for the course" when dealing with Great Whites. Meanwhile the video of the cage breach continues to grow on You Tube (500,000) garnering interest far and wide from not just the media, but government agencies in Mexico tasked with this sites enforcement, members of the Mexican Parliament, and a few NGO's whose agenda is clearly anti shark diving.

The lessons here are simple and two fold. Design and adhere to safer protocols for macro species encounters that do not rely on cage systems for "entertainment". Having white sharks bump, ram, or hit shark cages is both a disservice to the animals and inherently dangerous. Always control your media. When events like these happen there is a small window in which the operator may ask for the video or images. Videos such as these damage the credibility of all shark diving operations worldwide.

As an industry we live in a world where negative operations events (NOE's) are transmitted at light speed around the planet. These events will also sit on servers until the end of time reinforcing the image of sharks as deadly killers and no amount of post event spin will change that. As an industry whose livelihood depends on these animals, we can do better. Let's start by taking this video down and replacing it with a pro shark PSA, while at the same time ensuring these kind of events never happen again. The Times Online readership is 349,000 a day.

Editors Note: We just noticed the Sun also ran with the same story with a "Divers survive shark attack" headline. Good for sharks? Probably not.

Posted by Horizon Charters Guadalupe Cage Diving at 8:48 AM 3 comments: