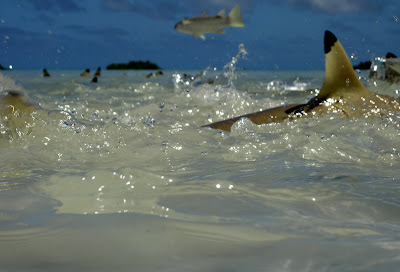 Just a regular Joe who happened to be at the right place at the right time to snap this amazing feeding event with some feisty Carcharhinus melanopterus in French Polynesia.

You have to click on this image to get the full effect of light, motion, and life.

Eric spends the rest of his time, when not shooting sharks, as an art student and you can see his work here.
Posted by Horizon Charters Guadalupe Cage Diving at 10:59 AM No comments:

Back in 2008 we posted these images and a call to action (see below). The images featured two Tiger sharks caught by sport fishermen. The animals were reduced to a set of jaws and some devastating pictures of decks littered with dead Tiger pups.

Three years later, Guy Harvey, the Bahamas National Trust and Pew Trust are mounting a terrific effort to get all of the Bahamas declared a shark sanctuary.

If you needed a reason for added shark protections these images should highlight that need now.

Please support this effort in any way you can and let's make these images the last of their kind:

SARASOTA, Fla. – For months the Deepwater Horizon oil spill shut down tourism and commercial fishing along the coast of the Gulf of Mexico. Along with killing 11 people, the disaster cost billions of dollars and the full environmental impact may not yet fully be known. But groundbreaking research happening in Southwest Florida could give us a better idea of the long term effects of the spill on the ecosystem.

Hundreds of millions of gallons of crude oil spewed into the Gulf of Mexico as a result of the Deepwater Horizon disaster.

“Once you have oil, that massive amount of oil spilled into the environment, you already got severe problems,” Dr. Richard Pierce, director of Mote Marine’s Center for Ecotoxicology told WINK.

The spill would eventually become the largest accidental marine oil spill in history. Mote Marine scientists jumped into action last summer to examine the immediate impacts. But the long term effects are the biggest concern. Mote’s Senior Vice President of research, Dr. Michael crosby explains the concept of trophic cascading, a way to refer to major changes in the food chain that could occur as a result of oil contamination.

“If any of those species are negatively impacted over the longer term following the oil spill, it has cascading impacts throughout the entire ecosystem; the entire seascape,” he said.

It’s easy to imagine that all forms of marine life, up and down the food chain, could be impacted in some way by the oil spill. At Mote Marine they are already conducting a study, starting at the very top.

Groundbreaking research is happening right now at Mote Marine involving sharks. Dr. Robert Hueter says when he started looking for other studies on the impacts of oil on sharks, what he found surprised him.

“Incredibly, we discovered there was only one paper in the entire world on oil contaminants. There are lots of other papers on other types of contaminants. But on oil (or hydrocarbons) and sharks — one paper in the whole world. So we’re really dealing with a vacuum of information and we realize this study that we’re doing now is not only going to tell us what’s happened, perhaps, with the Deepwater Horizon incident, but also lay the groundwork for understanding what the effects of oil worldwide could be on these shark populations,” he said. “We are looking at fertility and if the animal’s reproductive systems have been affected by the chemical pollution they may have been exposed to.”

Dr. Robert Hueter is leading a study to see how oil affects the top predators in the gulf, sharks! The team will take four, week-long cruises to the area around the well over a two-year period. They catch the sharks, collect blood and tissue samples, and in some cases tag them for future study.

“It’s a health assessment of the entire gulf. The Gulf of Mexico is a huge place. You don’t just figure these things out in months or even a year two,” Dr. Hueter said. “I’ve heard people say we dodged a bullet… I say we took a bullet. We didn’t dodge a bullet, but we took a bullet and we’re now assessing how bad the wound is and how much blood we’ve lost.”

Funding for Mote’s shark study is coming from a grant by the Florida Institute of Technology. The grant is paid for by money from BP. It even led to the purchase of new equipment to help analyze the data collected in the field. They take their next cruise into the spill zone next month.

Posted by Horizon Charters Guadalupe Cage Diving at 7:34 AM No comments: