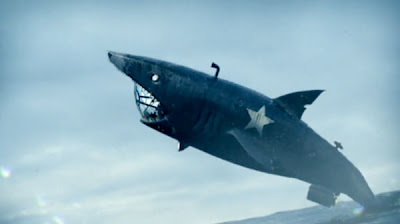 Only in Hawaii. As the ongoing saga of two commercial shark diving operations on Oahu continues, with a commercial vessel burnt to the waterline by unknown arsonists and a bizarre dismissal of a GPS chumming court case this week.

It's time to call this done.

What's been happening on Oahu is small town political vendettas under the guise of national security. At least that's the excuse agents involved in the prosecution of three commercial shark diving staff members who allegedly chummed for sharks within the territorial three mile limit off shore are offering this week.

Chumming within three miles happens on a daily basis by local fishermen in the region who are not hauled into court by agents posing as tourists.

The agents apparently used a "Super Secret GPS Tracking Device" to tell if the commercial shark diving operations were in fact within the three mile limit for chumming or not. When called upon by defense attorneys to provide access to the GPS device users manual and training material to defend their clients - the entire case folded last week. Like a house of cards.

Agents said these devices were so super secret that they constituted a national security risk - if the world ever discovered how they worked. We're thinking they have something to do with orbiting satellites, like the Garmin GPS we use, but that's just us.

Does anyone smell the sharp and unmistakable odor of chum that has been left out in the hot, humid, Hawaiian sun for a few days? We do.

So basically this is bull!@!!%$. Grade A stuff and tantamount to using government powers to wear down two very successful, and safe, shark diving operations on Oahu until they go away, or go bankrupt.

Frankly it is disgusting to watch. In a time when Oahu is suffering from a 60% drop in tourism revenues, and is struggling with massive debts due to tax revenue losses. A *few* government officials are spending money on wild super secret GPS cases with agents and lawyers to essentially kill two businesses on the North Shore who have been in business for a decade.

On a side note, the Super Secret GPS Device has been sighted.

North Shore surfers Allison Rand, and Matt Petoski took this image last week. We're pretty sure once folks on Oahu find out how much this GPS device cost local taxpayers (the four who are left on the island) there will be a lot more angst over a never ending and moronic quest to kill two commercial shark diving businesses that are doing nothing more than providing jobs, paying taxes, and adding to the richly diverse flavor of adventure offerings for tourists.

Now going into it's third year.

Posted by Horizon Charters Guadalupe Cage Diving at 7:50 AM No comments: