In the world of shark diving "originals" there's those who self-promote and then there's the true professionals.

Our world, that of commercial shark diving, rarely pays homage to those who make a living not from these animals but beside these animals. They are without a doubt pioneers in every sense and becoming rarer as each year passes.

We would like to introduce you to one-Ron Elliot, right about now you're saying Ron Who?

Off the coast of San Francisco the Farallon Islands holds one of the world's largest populations of Great Whites. By large we mean simply massive animals in the 18+ foot class. This site is also a commercial shark diving site with limited success rates. While the commercial shark diving efforts are relatively new-a solo urchin diver Ron Elliot has made these cold, low visibility, shark infested waters his home for the past 15 years.

Ron's been diving this treacherous site without any protection into waters that he can see only 20 feet on a "good day" with predators that the rest of us would never consider diving with...without a cage. Recently a short documentary was made of Ron at this site. The visuals are simply stunning. Almost unknown to anyone outside the diving community here in California, Ron and this new documentary features underwater footage of these massive sharks as they glide past him on a typical day harvesting the urchins he makes a living from.

Hat Tip: Shark diver Sean Kendrick for sending this in.

There's actually two shark diving companies in Hawaii of note both operate to the same sites and both come loaded with sharks, and more sharks:


The tour leaves Haleiwa Small Boat Harbor starting at 7:00 a.m. and lasts two-hours. Tours are available throughout the day Shark Adventures uses a custom 32-foot Anderson boat with a swim step on the transom of the boat. Tours are limited to six persons so there is no overcrowding.

Safety of our passengers is our first priority. A safety briefing is given at the start of the tour. People may bring their own mask and snorkel, however, fins are not necessary. Masks and snorkels are also provided on the vessel "Kailolo II". "Kailolo" means water crazy. Once we get to the area, the shark cage is placed in the water. The cage floats on the surface of the water. The water is a cobalt blue and visibility is approximately 200 feet or more. You can actually see the sharks come up from the deep.

Editors Note: Count us in!

One more reason not to consume sharks in any form:

FOR IMMEDIATE RELEASE -- Anaheim, CA -- September 2, 2008-- Action Labs, Inc. of Anaheim, CA, is voluntarily recalling its Sentinel brand Shark Cartilage Capsules manufactured in 2005 because they have the potential to be contaminated with Salmonella, an organism which can cause serious and sometimes fatal infections in young children, frail or elderly people, and others with weakened immune systems. Healthy persons infected with Salmonella often experience fever, diarrhea (which may be bloody), nausea, vomiting and abdominal pain. In rare circumstances, infection with Salmonella can result in the organism getting into the bloodstream and producing more severe illnesses such as arterial infections (i.e., infected aneurysms), endocarditis and arthritis.

Routine testing performed recently at NBTY, Inc. (the manufacturer) shows that the recalled capsules have the potential to be contaminated with Salmonella. Although multiple lot numbers may have been involved in the recall by NBTY, only NBTY lot number 64951 was purchased, repacked and distributed by Action Labs, Inc. 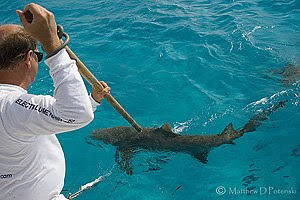 Recently Doc Grubers team from the Bimini Shark Lab went to Tiger Beach, Bahamas to conduct some "tagging and tracking"of the locals there.

Is it just us, or in a field of shark researchers, these guys seem to have more fun?

Here' the expedition report, it's a must read:

We anchored up and started to put chum in the water to attract the sharks. It didn't take long to get a good slick of menhaden oil and blood fanning out from the stern in the current. I went inside the boat to prepare my camera gear and wait for sharks to find their way to us. Steve had hung a huge snapper carcass off the back of the boat, so I was confident we would have some hungry customers showing up real soon. Within an hour we had six lemons circling the back of the boat. We started throwing bait in to them and drew them close to the boat with pieces of bait on lines. When they got within range we popped them with a pole spear to take a small skin sample for DNA analysis. More lemons joined the fray until we had approximately a dozen prowling off our stern. As we glanced around Steve and I saw a large dark shadow making a large arc about 100 meters behind the boat. We looked at each other and excitedly shouted "TIGER!!!"
Posted by Horizon Charters Guadalupe Cage Diving at 7:31 AM No comments: