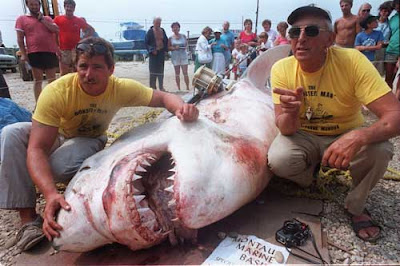 We have been following the fate of the Cricket Two over the past year.

Our concern was this notorious shark killing vessel, once put up for auction, might end up in the hands of someone who saw the media potential of it as clearly as we did...for the promotion and continuation of east coast shark kills.

That event happened this week as new owner Jon Dodd, 47, a regular at shark fishing tournaments in Montauk, said he plans bring this vessel back regularly for shark tournaments.

$51,000 bought Mr.Dodd the finest pro shark fishing media machine money can buy on the east coast. Our attempts to purchase this vessel outside of the auction failed - even though a preemptive offer of $150,000 was sent to the wife of Frank Mundus.