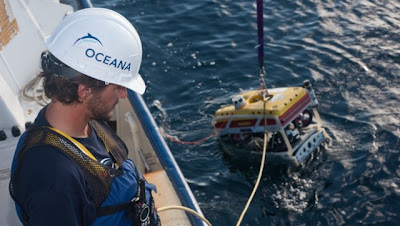 Thanks to Shark Diver Gabriel Beyrent for the Oceana media find this morning:

Oceana have deployed underwater sensors in the area where a B.P oil rig exploded and collapsed nearly five months ago, spewing 200 million gallons of oil into the Gulf of Mexico.

They have used underwater cameras to check out an area called the Alabama Alps. They have sent divers down to look for evidence of dead sea life on the floor of the Gulf. Now scientists will be going shark fishing next week to see what effects, if any, the nation's worst oil disaster has had on those creatures.

"I think the picture is still cloudy,'' said Michael Hirshfield, the chief scientist at Oceana, an international conservation group.

Hirshfield made his comments earlier this week aboard the Oceana Latitude as it was about 20 miles off the shore of Mobile, Ala. The ship is expected to dock in St. Petersburg this weekend as the crew gets ready for the next leg involving sharks.

On Tuesday and Wednesday, scientists from Oceana and the National Aquarium will team up to head into the Gulf to fish for sharks. "We'll have to see what we can catch,'' said Elizabeth Wilson, a marine scientist and fisheries campaign manager for Oceana. "Our hope is we can find hammerhead and bull sharks.The sharks will be measured, logged and tagged and released back into the Gulf. If they are ever caught again, researchers can compare the original data. They can see how much they have grown, where they have moved to, and if they have suffered any ill health effects."It's a big unknown, but it is definitely something that I am concerned about,'' Wilson said of possible consequences from the oil in the Gulf.

The 170-foot Latitude vessel has been at sea in the Gulf since earlier this month and will be at sea until early October, except for the brief pit stop in St. Petersburg.
Posted by Horizon Charters Guadalupe Cage Diving at 11:29 AM No comments: