And now for something completely different - Video

No explanation needed. Just keep your head down: 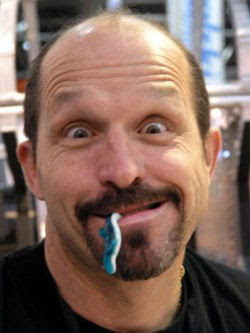 It's run by a guy who almost lost his leg to a shark attack, not a shark accident.

The actual accident was Dr. Ritter himself, standing in water, waist deep, surrounded by feeding bull sharks in a free baited shark soup with absolutely no controls. The video remains one of the best examples of idiot shark handling ever shot.

Ritters one time stunt work with sharks has never been repeated.

The end result was one of the worst shark attacks caught on tape and the beginning of Dr.Ritters "career" as an industry laughingstock and another example of failed shark handling ego vs wild animals.

Dr.Ritter has gone on to promote his own branded Shark School in a manner that PT Barnum would have been proud of. Along with Shark School video PSA's that are factually incorrect, moronic in their simplistic assumptions, and dangerous in their conclusions.

Sharks are predators. That makes them inherently dangerous, those who work with sharks and lose that understanding, like Dr.Ritter, end up discovering the predator first hand. Dr.Ritters own shark attack is an example of ill informed human/shark interaction that has played itself out over and over.

Dr. Ritter has proven without a doubt, and sadly with the loss of his calf that his whacked out, sideways, new age, holistic shark views are simply bunk science at best, at worst a serious and dangerous disinformation campaign for those seeking real interactions with sharks.

Ritters latest Shark School PSA is complete and utter garbage. The PSA not only wants the viewer to believe that 200 million sharks are being killed each year, a number double that of worst estimates, but if sharks get harvested, the oceans will die.

In a time of profound shark crises, facts, not Ritter inflated hyperbole are needed, and in a time when the global shark diving industry is moving towards safe interactions with sharks, this PSA stands as a complete throwback to an earlier time when shark "accidents" happened only when divers failed to treat sharks with the respect they deserve. As predators.

Will Dr.Ritter stop this nonsense?

As PT.Barnum once said, "there's a sucker born every minute," and this is Dr.Ritters Shark School marketing plan, because no one in our industry is buying it.

Posted by Horizon Charters Guadalupe Cage Diving at 11:35 AM 2 comments:

As word comes in of the worst natural disaster to hit Japan in it's entire history, 400,000 homes washed away, refineries on fire, and a nuclear power station on the brink at Fukushima Daiichi, it's time to reach out to Japan.

Every once in a while we are all called upon to rise above partisan agendas and be - human. That statement is directed at the conservation community, whose online network, media, and boots on the ground could really help Japan right now.

Let's see who's got what it takes.

Our best wishes for Japanese people, you can donate to the Red Cross this week to help the folks on the ground.
Posted by Horizon Charters Guadalupe Cage Diving at 9:20 AM No comments: 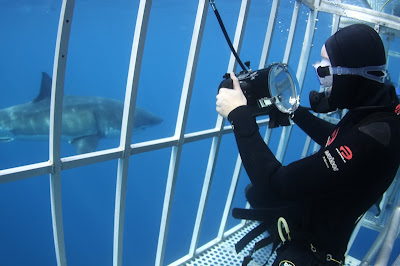