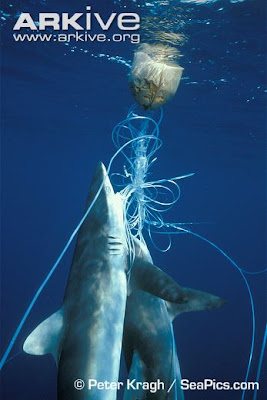 While Australia races headlong to hunt down and kill a white shark that recently attacked and killed an American diver last week let's take a moment to see how positive shark interactions can change perceptions, starting with the very young.

Note:  If you want to send an email to stop the shark cull here are the folks you need to reach, please be respectful:


This video from is Compass Key, Bahamas known as the "Shark Diving Capitol of the World," here at least sharks are sources of tourism revenue and when unfortunate encounters with sharks occur, they are not hunted down with indiscriminate baited longlines.

You might say that the Bahamas carries an enlightened approach to sharks understanding that they inhabit the same oceans with us and that selectively removing them when it is politically expedient to do so does nothing to ensure that these rare negative encounters will not happen again.

Tragedies with sharks will always be just that, tragedies.

Our responsibility to the oceans eco system is to work in harmony with sharks. Rottnest Island has a long and storied history of white shark encounters going back to the late 1800's. If there is blame for a tragedy with sharks let's start by asking why dive operations in the area, who know of white sharks at Rottnest, are taking divers into the realm of the white shark.

There's simply no such thing as a "rogue killer shark".

There is, unfortunately, such a thing as poor decision making:

Posted by Horizon Charters Guadalupe Cage Diving at 10:03 AM