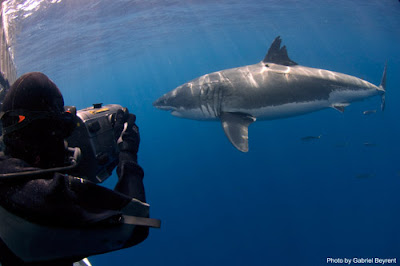 Richard Theiss took time out this week to share his thoughts on filmmaking, sharks and the industry.


"In speaking engagements, I have often said that shark conservation is a tough sell. To be sure, there are dedicated shark advocates who understand both the important role that sharks play in a healthy marine ecosystem and the many threats these animals now face – but that represents a small number compared to the general viewing audience. Sharks are not afforded the “warm and fuzzy” factor that many terrestrial animals enjoy – the cuddly bear, the cute fur seal, or the seemingly wise and sociable whale. Sharks can seem cold and, as predators, lie just below the surface – waiting for us. That’s a tough image to work around."
Posted by Horizon Charters Guadalupe Cage Diving at 8:33 AM No comments: