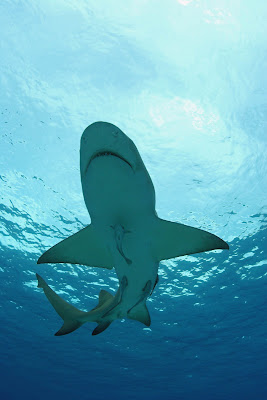 When it comes to shark conservation in Mexico there's few champions like Dr.Leonardo Castillo. He oversaw and wrote the proposed Isla Guadalupe rules and regulations regarding white shark diving and is a tireless campaigner for sharks.

Recently he and his team were responsible for the averted slaughter of sharks off the coastlines of Ixtapa-Zihuatanejo-after a series of shark attacks this spring that enraged locals and resort owners:

ACAPULCO, Mexico (AP) — Scientists say they have begun tagging thousands of sharks off Mexico's Pacific Coast in the hopes of preventing new attacks on humans.

Castillo says that 15 another sharks will get sonar transmitters and 2,000 more will get plastic tags that can be tracked by fishermen.

Sharks recently killed two surfers and wounded a third near the southwestern resort of Ixtapa-Zihuatanejo, about 240 miles (150 kilometers) north of Acapulco.

Editors Note: Just goes to show you how "one person", with enough drive and conviction, and willing to get out ahead of an issue can effect change in a positive way for sharks. Kudo's to Dr. Castillo.