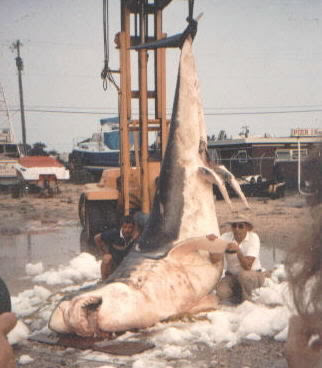 Melanie from Shark Trust Wines sent in this email this morning.

While the rest of America celebrates the 4th today please take 5 minutes out of your day to do something for the sharks. They need your help more than ever:

The U.S. House of Representatives is scheduled to consider the Shark Conservation Act of 2008 on Tuesday, July 8. The bill aims to close loopholes in the national fining ban, prohibit the removal of shark fins at sea, and encourage international shark conservation.

U.S. citizens wishing to support the bill should contact their Representatives as soon as possible. To find yours, go to www.house.gov and type in your zip code in upper left corner of page.
Posted by Horizon Charters Guadalupe Cage Diving at 12:33 PM No comments:

Wyland and his plates-gimee my money!

We blogged about this sad event last week. In terms of poor public relations "the artiste" Wyland dropped a media art bomb on California with all the expected results.

Now others in the blog world and even the LA Times has responded with a pithy Op-Ed skewering the artist in a way that only the LA Times can.

Wyland has his own nonprofit foundation and wanted 20% of the state's profits from his plates -- about $700,000 a year -- donated to it. He worked out a similar deal, for 10%, with Florida, but for California, this is a load of blubber. The Wyland plates have been prettifying cars for years, but the state Department of Motor Vehicles isn't a marketing tool for any individual's ventures, for profit or not. No commissions in return for the use of intellectual property.

"The whale tail is my art and my idea," Wyland spouted off to The Times. "I'm sticking up for artists' rights, for the common person."

Not that common people generally travel the world painting gigantic cetacean murals, but we get the concept. Wyland's donation of the license plate design, however temporary, was a terrific gift -- for the state, its drivers and for him. He's had thousands of free mini-billboards all over the freeways this last decade.

Editors note: Perhaps Wyland should invest in a few "Oompah Loopahs" to help him haul around that massive ego of his.

Posted by Horizon Charters Guadalupe Cage Diving at 9:28 AM 2 comments:

The futue of commercial shark diving? 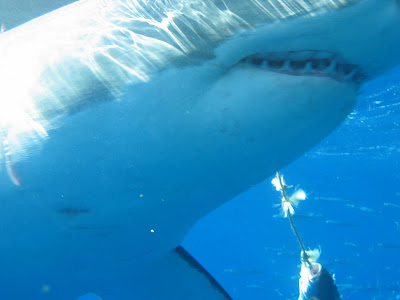 Let us consider the thorny issue of commercial shark diving and Aquariums. Recent trends would suggest that the public's demand to meet sharks in almost any situation has created this new and emerging market.

This morning another Aquarium joined this growing trend:

Dive with sharks at the Florida Aquarium

Dive with the Sharks gives you the opportunity to SCUBA dive with shark species from around the world in our incredible Shark Bay exhibit. We provide the sharks and all of your gear for this experience of a lifetime. This experience will put you up close and personal with the ocean’s top predator on every dive.

PURPOSE: The Dive with the Sharks program is designed to dispel the commonly held myth that sharks are man-eaters and to convey a strong conservation message to our guests. Essentially, this is an extension of our very successful and popular dive show "Sharks! From Fear to Fascination!"

The question now is why not? Why not create entire commercial "shark parks" where divers from around the world can interact with sharks from all corners of the planet diving in man made environments filled with both ocean and freshwater critters.

The idea may seem far fetched, but we're almost there, what is missing is stunning backdrops that redefine the entire dive experience. Imagine recreating unique dive sites like Truk Lagoon filled with sharks, or sunken ruins from long ago civilizations. Imagine learning to dive in what amounts to a man made wonderland of wildlife and dive site re-creation?

What is missing is vision. As long as Aquariums continue on this path the next step is not too far down the road.

Posted by Horizon Charters Guadalupe Cage Diving at 8:30 AM No comments: