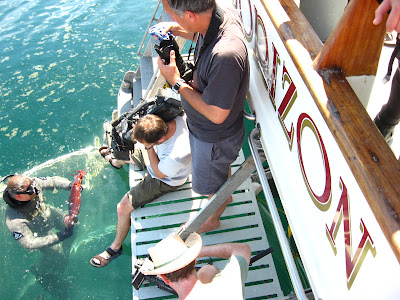 For the next 20 days the MV Horizon will be at Isla Guadalupe with a film crew from Japan.

They are there to discover and document the "islands inhabitants."

Like the 30 day expedition with the BBC they did last year, the crew are sending back regular updates.

This week the film crew with the help of Captain Spencer witnessed something never before seen at Isla Guadalupe, changing the way we view the wildlife here once again.

Again we are off the boat before the sun even has a chance to wake up for the day. Away we go off to capture some more footage of the female elephant seal ready to give birth. Or so we thought... after hours of watching, looking and waiting we come to a sad realization that she is gone. Maybe she moved to another beach or maybe she gave birth over night. Nobody knows all we do know is that she is gone. As we wrap up the morning at the beach we get a rare look into the world of wild animals at their finest.

On the way back to the Horizon we spotted a baby Elephant Seal swimming on the surface, so we headed over to take a look and could immediately tell there was something wrong. Maybe he was sick, or injured, all we knew was that it wasn't looking good for this baby out in shark infested waters. As we followed behind the pup, four dolphins joined in on our curiosity. We thought they might try to take advantage of the wounded seal, but fortunately we were mistaken, the dolphin were actually helping the seal back to shore. As the pup struggled for air the dolphin repeatedly dove and lifted the young pup to the surface to breath. It was AMAZING! The dolphins actually were guiding the seal back to shore.

Never in my life would I think a dolphin had such compassion. After the seal made it to shore the dolphin gave a tail slap on the water, as if to say, "high five!" Then off they went into the wild blue. After lunch we spent time on the boat catching up on some editing and interviews. Then out of no where a 12 foot white shark decided it was sick of being cooped up in the ocean and breached 200 yards from the boat. It was awesome. To see such a large shark launch itself out of the water like that.

Now we know for sure the sharks are here. Maybe tomorrow we will put the cage in and see what is swimming below.