Oh, about that little shark that washed up in Nantucket last month? It was a Great white: 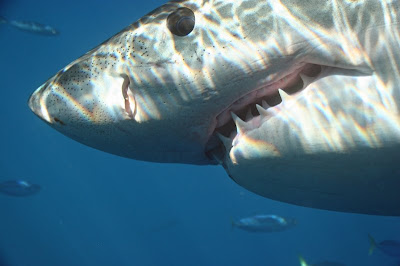 Their February 2008 position paper on the matter is a "must read" for shark diving operators worldwide.

No, this is not one of your classic "man bites dog" headlines this is the real deal.

By the way, Greenland Sharks are rapidly becoming one of our all time favorites around here:

Scientists researching how far sharks hunt seals in the Arctic were stunned in June to find part of the jaw of a young polar bear in the stomach of a Greenland shark, a species that favors polar waters.

"We've never heard of this before. We don't know how it got there," Kit Kovacs, of the Norwegian Polar Institute, told Reuters of the 10 cm (4 inch) bone found in a shark off the Norwegian Arctic archipelago of Svalbard.
Posted by Horizon Charters Guadalupe Cage Diving at 11:20 AM 1 comment: 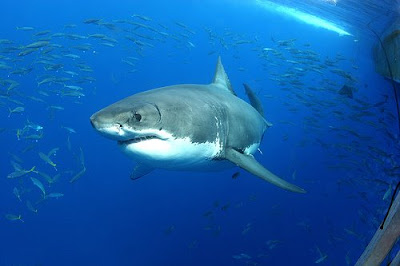 We just got off the phone with them and here's the update:

The sharks are once again back at Isla Guadalupe. Day one was slow, with two sizable Mako's making an appearance and then disappearing into the clear waters and not returning.

Mid afternoon-Day one-three great whites show up and for the next two days the crew and divers on board the MV Sea Escape are treated to sharks, sharks, sharks!

It looks like another shark filled season this year. For those few of you who'll be joining us out there we look forward to showing you a shark or two. August 18-22 cannot come quickly enough!
Posted by Horizon Charters Guadalupe Cage Diving at 8:53 AM No comments: