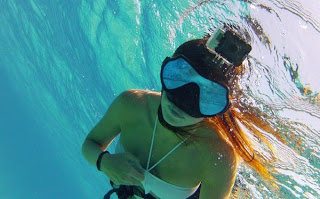 Once in a while along comes some truly great underwater footage - this is one of those times.

What's not to like about Roberta Mancino and Mark Healy, two consummate underwater folks, doing their thing in the Bahamas?

As we said a few months back about Mark Healy:

"Mark should get his own television show, soon, because he's that good on camera."

Kudos to this duo for working with sharks without the "moronic messaging" that all too often goes along with those who interact with sharks. A world where sharks cannot be sharks, they need to be redefined and reintroduced to the public as mobile plush toys that just need a hug...all in the name of conservation.

Interacting with sharks in the pursuit of a stunning image without the messaging is in its own way far more impactful than the overt in-your-face new shark realities foisted on a public that all too often finds them hard to absorb.

Watch this video and be sure to voice your opinion for more.

Clearly this team is on to something here and it's a formula we could all use more of.