Last week in the middle of another commercial film and television shoot on Tiger Beach we celebrated the arrival of Denny, a little Tiger shark we had come to know and love this spring in the Bahamas.

The celebration lasted until we saw the close up images that Greg "Moondog" Mooney surfaced with.

Sadly it looks like little Denny (all three feet of him) had been chomped on by another resident Tiger, crushing his dorsal fin and leaving behind several healing puncture wounds. Additionally he survived a fisherman's hooking event recently.

If you click on this image you see the hook and line in the corner of his mouth.

The good news is that sharks are very resilient critters and if he can stay out of any more trouble little Denny might just get big enough one day to hold his own at Tiger Beach.

Life can be tough for sharks in the wild and we'll continue to follow Denny's progress and update you as he grows up, right now he's a cute little guy who's always showing up in the thick of things not quite sure where he belongs.

Thanks to Greg Mooney for the shot and Fraizer Nivens for the image highlighting.


Posted by Horizon Charters Guadalupe Cage Diving at 8:23 AM

For those of us who lament the downward spiral of underwater programming, along comes the BBC and a stunning expose on Pacific tuna fisheries.

This is the new bar, it's been reset, the imagery is stunning, the underwater work flawless and the story telling out of this world.

Take a moment today to watch this clip, and if you happen to be in the business, pay attention:

Posted by Horizon Charters Guadalupe Cage Diving at 6:55 AM 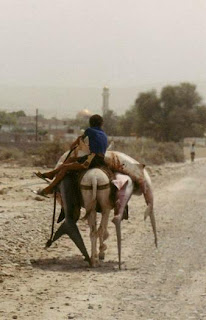 Johnson Toribiong, president of Palau, and Porfirio Lobo Sosa, president of Honduras, are to be joined by leaders from other countries to sign a new declaration committing to the development of sanctuaries, which end commercial shark fishing in their national waters, the release states.

The signing is to take place at the Millennium UN Plaza Hotel in New York City, the release states. Matt Rand, director of global shark conservation of the Pew Environment Group, is also to be at the signing.

The Pew Environment Group is the conservation arm of The Pew Charitable Trusts, which is a non-governmental organization that works globally to establish pragmatic, science-based policies that protect the world’s oceans, preserve wildlands and promote clean energy, the release states.

Two years ago, no country had declared all of its waters as a sanctuary for these creatures. Today, more than 2.7 million square kilometers have been set aside, more than the area of Mexico and Texas combined, according to the release.
Posted by Horizon Charters Guadalupe Cage Diving at 6:29 AM

In reality this weeks announcement is an arrow in the quiver of a total global approach to shark fisheries.

We cannot rely on bans, set aside areas, and tourism to complete the shark management story. Somewhere shark fisheries will have to be part of the equation.

In Canada the first step to shark management has begun.

Complete story in the Vancouver Sun.

Posted by Horizon Charters Guadalupe Cage Diving at 5:48 AM

Michael Aw - Some Kind of Awesome

It's 2011 and the more cynical among us might imagine a world that has been picked over, where true adventures and underwater discoveries are relics of the past.

Michael's expose in this months National Geographic tells the tale of regional fishermen in New Guinea who interact with Whale Sharks in surprising ways.

Run, don't walk, to the nearest Barns and Noble if you are not fortunate enough to get Nat Geo delivered to your doorstep and pick up this months magazine.

This is about as good as it gets and kudos to Michael for the great work.
Posted by Horizon Charters Guadalupe Cage Diving at 5:13 AM