Hawaii - "We want to stop it before it occurs"

The island of Maui voted unanimously to recommend passage of a bill banning all island shark tour businesses this week.

The catch? Maui has no shark tour businesses.

In the ongoing saga of rampant, unchecked, anti-shark diving sentiment in Oahu, Maui will completely ban the activity preemptively sometime this month.

For the global shark diving industry this is another "nail in the coffin" to regional efforts, setting another ugly anti-shark diving precedent.

Despite this blogs calls for industry help and leadership, giving full time coverage of the issues, not much has been done to stem the inevitable steam roller effect of shark diving bans now slated for Oahu's two existing operations.

Already NOAA has instituted a 160' distance regulation for white shark tours at the Farallones and Isla Guadalupe's ban on chumming is still in effect for a second season.

Does anyone see the problem here?

Council members said feeding sharks for entertainment was offensive to Native Hawaiians, and expressed concern the practice could change sharks' natural behavior. They said they planned to pass the ban before any shark tour businesses could open on Maui like some have on Oahu.

"We want to stop it before it occurs," said Council Member Wayne Nishiki, who introduced the measure.

The bill is expected to come before the full Maui County Council for first reading on Aug. 25.

While the county government doesn't have any authority over activities that happen off-shore, the bill would regulate the business side of shark tours, prohibiting any business that charges customers to enter the ocean to feed or attract sharks for viewing from operating within Maui County. 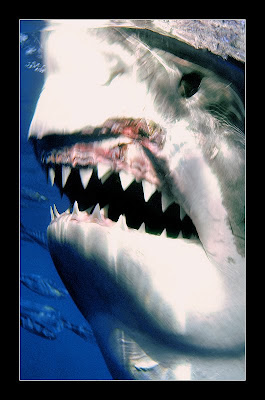 Posted by Horizon Charters Guadalupe Cage Diving at 7:47 AM 7 comments: