This is all that is left of a record shattering, 1,060lb pregnant hammerhead - deliberately stalked and killed by Floridian fishing guide, Bucky Dennis.

Last week we suggested that this targeted kill went by without much noise. As it turns out we were wrong.

Regionally, fishermen, guides, and shark advocates came forth to say "no more". This is a good thing as the "times-are-a-changing" and dead record sharks are less than well received these days. Kudos to all who raised a voice and to Mote Marine labs for refusing to take the carcass.

In the end where ever you have records you'll have those who want to break those records. Be it fishing for pregnant hammerheads (these animals have a predictable pupping season and weigh more) or pogo'ing around the planet...backwards.

Articles like this weeks St.Petes Times set the tone for further discussion and greater awareness to "targeted kills" such as this. Record agencies like the IGFA who, in essence cause and sanction these kills year after year, should consider taking pregnant animals off the list. In fact an interesting clause to take away previous records if animals are found to be pregnant would stop this practice all together.

Bucky Dennis is only a symptom of a larger problem and one that ultimately has a solution within the IGFA. 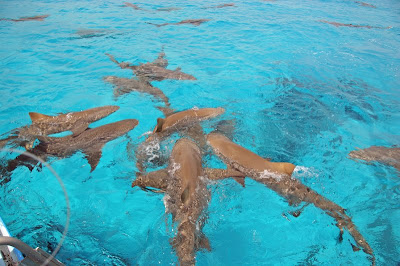 Hard not to be impressed with commercial shark operator Stuart Cove, Bahamas. As a template for "How to do Shark Media 101" today's ABC News GMA piece was a cornucopia of pro shark images, data, and industry quotes.

As a commercial shark diving operator you can do pro shark, pro industry media. As Stuarts Cove has aptly demonstrated you need to pick your partners well.

Running with the three tenets of shark media, host country, sharks, and divers this weekend Stuart Cove rolled out a great piece that carefully balanced all three and delivered an industry home run:

The divers feed the sharks small amounts of food to better observe them, but they're careful not to disrupt the ecosystem. A scientist from a Vancouver university who studies these Caribbean reef sharks estimates the food from the divers has about as much impact on the sharks' diets as eating one grape a day would have on a human's diet.

Complete Story
Posted by Horizon Charters Guadalupe Cage Diving at 7:39 AM No comments: