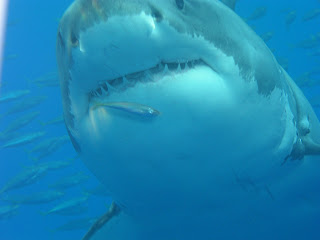 Australians woke up this morning to a media frenzy around a rare fatal shark attack in NSW. Here's some of the latest reporting filled with the standard shark attack catch phrases designed to keep you out of the water for at least a month.

THE fatal shark attack on a teenage surfer in northern New South Wales is the first in Australian waters in over two years, and the first in NSW since 1993.

However, the boy's death follows a number of non-fatal attacks and shark sightings in the region over the past year.

The 16-year-old surfer was fatally mauled near the North Wall at Lighthouse Beach at Ballina this morning while bodyboarding in murky water with a friend.Experts say the shark - possibly a bull shark - may have been attracted by the heavy flow of fresh water from the nearby Richmond River, which in turn draws schools of fish.

It is the first fatal shark attack in Australia since January 7, 2006.

Sarah Kate Whiley, 21, from Brisbane's north, was attacked at Amity Point at North Stradbroke Island east of Brisbane that afternoon as she swam in waist-high water.In an horrific attack, Ms Whiley was mauled by up to three bull sharks, which ripped both her arms from her body and bit into her torso and legs.

Two fishermen dragged Ms Whiley out of the water onto the beach, before she was airlifted to a Brisbane hospital where she died of shock and massive blood loss. The next prior shark attack death occurred in South Australia in August 2005, when marine biologist Jarrod Stehbens, 23, was taken by a shark while diving for cuttlefish eggs off Glenelg in Adelaide's west.

However, it was just over four months ago that two schoolgirls were stranded on a shipwreck as a shark circled below them at Byron Bay, about 20 kilometres north of where today's attack occurred. The girls, both 14, were diving off the wreck on November 21 last year when one of them spotted the "large, dark shark".

Lifeguards were able to rescue the girls, but the popular tourist spot's main beach was temporarily closed as a precaution.Six weeks earlier, and also in Byron Bay, a woman was knocked from her surf ski by a white pointer.

Linda Whitehurst, 52, and her husband Glen were paddling about 150m off shore at The Pass on October 15 last year when the 2.5m shark bit into her surf ski, toppling her into the water.The experienced paddler was able to fend off the shark by belting it with her paddle, and she escaped with a small wound on her arm.

On the morning of February 3 last year a 26-year-old man escaped an attack with several similarities to today's attack, just a few hundred metres north of Ballina's Lighthouse Beach. Matthew McIntosh was riding a wave on his body board at Shelly Beach when he was bitten on the lower leg by a shark.

According to figures from the International Shark Attack File, compiled by the Florida Museum of Natural History in the US, there were 12 shark attacks in Australia in 2007, up from seven in 2006, 10 in 2005, and 13 attacks in 2004.

But Taronga Zoo's John West, who established the Australian Shark Attack File in 1984, said Australians are more likely to be killed on their way to the beach than killed by a shark."If you take the average fatalities over the last 10, 20, 50 and 100 years, the average is 1.2 deaths per year," Mr West said.

Today's attack puts NSW at the top of the list of shark attack fatalities since records began over 200 years ago, with 73 of the nation's 192 shark attack deaths recorded in the state.Queensland is second on the list with 72, followed by South Australia with 19 and Western Australia with 13.

However, Mr West said NSW has actually been one of the safest states in the last 50 years.

"The last fatality in NSW prior to this was in 1993, and prior to that was 1983, so it's been 15 years since we've had a fatality in NSW," Mr West said.
Posted by Horizon Charters Guadalupe Cage Diving at 8:22 AM 2 comments: