Gulf of the Farallones - Hooking Sharks Round Two? 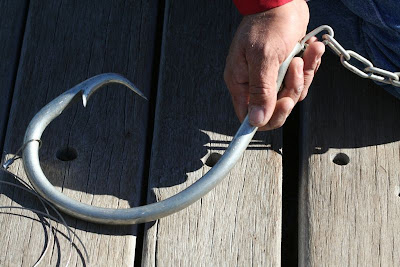 Research teams are back at it with a new draft proposal to bait, hook, and tag more sharks at the Gulf of the Farallones Marine Sanctuary.

The draft proposal is here.

Public comment can be emailed to sanctuary staff member Carliane.Johnson@noaa.gov until October 12, 2010.

Last years effort was well documented when a breeding aged white shark was foul hooked, and the hook had to be cut free with a pair of industrial bolt cutters.

The hook was embedded so deeply that cutters had to be pushed through the sharks gills.

Only a small percent of the hook was recovered and the rest was left inside the animal.

Apparently, and much to the research teams relief, the animal lived. It still has a man made hook embedded deep in its throat prompting Maria Brown, Farallones Sanctuary Manager, to give the following assessment of this kind of research:

Please read that statement again. It was for the record to ABC News in regards to a throat hooked protected species in a National Marine Sanctuary. The 2009 permit was issued for a research/television show called Shark Men.

A team of expert anglers, a renowned shark scientist and a Hollywood heartthrob join forces to unmask the mysteries of the world's largest predatory fish. Their bold expedition includes a unique vessel with an unprecedented way to lift Great Whites out of the water for examination.

The ensuing foul hooked shark media calamity was a black eye for both the Farallones, the entire NOAA sanctuary system, and invasive shark tagging programs. Our views on the matter were for the record and we were one of the few commercial shark diving operators to take a public stance against this kind of research. For reasons that remain obvious to this day.

No one can guarantee a hooked white shark will not suffer grievous damage with this kind of work.

In the end this brand of invasive research/television programming will have to be decided by interested parties, use groups, other researchers, and the general public.

Should be an interesting few months.
Posted by Horizon Charters Guadalupe Cage Diving at 7:11 PM No comments:

Age and growth of the great hammerhead shark, Sphyrna mokarran, in the north-western Atlantic Ocean and Gulf of Mexico


The great hammerhead shark, Sphyrna mokarran, is a cosmopolitan species that is caught in a variety of fisheries throughout much of its range. The apparent decline of great hammerhead shark populations has reinforced the need for accurate biological data to enhance fishery management plans. To this end, age and growth estimates for the great hammerhead were determined from sharks (n = 216) ranging in size from 54- to 315-cm fork length (FL), captured in the Gulf of Mexico and north-western Atlantic Ocean. Growth curves were fitted using multiple models and evaluated using Akaike’s information criterion. The von Bertalanffy growth model was the best fitting model, with resulting growth parameters of L∞ = 264.2-cm FL, k = 0.16 year–1, t0 = –1.99 year for males, and L∞ = 307.8-cm FL, k = 0.11 year–1, t0 = –2.86 year for females. Annual band pair deposition was confirmed through marginal-increment analysis and a concurrent bomb radiocarbon validation study.

Great hammerheads have one of the oldest reported ages for any elasmobranch (44 years) but grow at relatively similar rates (on the basis of von Bertalanffy k value) to other large hammerhead species from this region. The present study is the first to provide vertebral ages for great hammerheads.

In the Indian Ocean, as elsewhere in the world, shark fishing has been increasing at an alarming rate with tens of millions being caught each year worldwide. Visiting a small community in Mozambique, where shark fishing has only recently become an established practice, Philippe Cousteau Jr and his team discover what is driving the trade:

Position Summary: The Cape Eleuthera Institute is accepting applications for Research Internships within the Shark Research and Conservation Program. Successful applicants will gain a wealth of hands on field-based experience in addition to a solid theoretical foundation from the scientific literature, through readings and group discussions.

Primary Responsibilities: Field work will primarily focus on conducting scientific longline surveys around South Eleuthera. Candidates will learn how to deploy and retrieve lines, and handle and tag sharks in a manor that will ensure the safety of the sharks and the crew. Non-field based duties will include the maintenance of field equipment and data entry. On occasions Research Interns will also have the opportunity to assist in the field or lab with other Cape Eleuthera Institute research initiatives, such as the flats ecology, aquaponics, sustainable offshore aquaculture and permaculture programs.

The normal working week is five and a half days, however all research is weather dependent and Research Interns should expect their work schedule to be flexible. On occasions, Research Interns will be required to work weekends.


Qualifications: Applicants must be a minimum of eighteen years of age and should have completed, be planning to complete, or in the process of completing an undergraduate degree in a biology related field. Candidates with previous research experience and an active interest in marine research will be given priority.

Skills: This position requires long hours of physical work in a variety of sea and weather conditions. As such applicants must be in good physical condition, and feel comfortable working on boats for extended periods. Boat driving experience would be a benefit, but not essential. Applicant should be proficient in Microsoft Word, Excel, and Power Point.

For the right candidate there is the opportunity to gather data for an undergraduate thesis. This will be assessed on a case-by-case basis following discussion with home institutions and supervisors.

Cost: $500 month which covers room and board at CEI. Email contact below to find out additional information on scholarship opportunities.
Posted by Horizon Charters Guadalupe Cage Diving at 12:34 PM No comments:


Dive and shark enthusiasts are requested to assist the 'Thresher Shark Research and Conservation Project’ (TSRCP) in conducting fieldwork in the Philippines from January – September 2011. This is an unique opportunity for individuals with a keen interest in diving with sharks to gain hands on experience in shark survey methodology, behaviour, biology, ecology and conservation. Volunteers will be based on Malapascua Island (Cebu) and shuttled to Monad Shoal aboard a dedicated research vessel. Ops will run from 05:00 to 20:00 five days a week and include SCUBA survey, underwater video observation, tagging (pending funding) and photographic ID databasing. Evenings will be spent in academics, training, reviewing video observations, analysing data and preparing for the next day’s ops.

All volunteers will receive comprehensive hands on training in shark research methodology, marine wildlife photography, marine videography and analytical approaches to understanding shark behaviour. Volunteers will also receive academics in shark biology, ecology, conservation and ethology (behaviour) and will apply learned concepts to the analysis of real data that they acquire on a daily basis. Members will benefit from a close working relationship with a specialist.


For expedition dates and details please visit The Thresher Shark Research and Conservation Project at: