In response to increased use of Shark Shield technology by film and television companies, Shark Shield Pty Ltd has appointed Shark Divers as its official regulatory authority for the Northern Hemisphere. Director of Operations, Luke Tipple, will oversee all production issues concerning Shark Shield while Ian (shark) Gordon will represent the Southern Hemisphere. Our mutual goal is to ensure safe and effective use of our product while ensuring our strict standards of use are maintained.

Shark Shield TM is a unique shark deterrent system utilizing a technologically advanced three-dimensional electronic wave form. Shark Shield units are designed for recreational users and water sports professionals alike and aim to help all people enjoy and work in the ocean with a new dimension of peace of mind for themselves, their families and employers.

Shark Shield provides proven protection against all predatory shark species including Great Whites, Tigers, Zambezi's (Bulls), Makos and Bronze Whalers, among others. The electronic pulse emitted repels the shark by inducing muscle spasms via stimulation of the Ampluae of Lorenzini, the sensory organs present on sharks' snouts. There is no permanent damage to the animal, or harm to the environment. Shark Shield products are proven to repel sharks.

Filming shark sequences for commercial use frequently requires manufacturing an unnatural environment to attract sharks which can change their behavior and create a heightened danger for humans. The incorrect deployment of a Shark Shield product either intentionally or unintentionally could reduce the effectiveness of our products. For both safety and legal reasons we cannot and will not permit this to occur and have implemented a film and television usage policy which is conditional.

Legal action may be taken against film or television companies using a Shark Shield for shoots when approval has not been granted.

No shark deterrent system should be a replacement for the understanding of sharks and the site you are operating in, as well as the safety crews you employ. Shark deterrent systems are and always will be a last line of defense for any shark shoot or shark site you have in place. Certain water activities inherently involve the danger of potential shark encounters or attacks. Shark Shield has proven effective in deterring said instances however, due to the variables present with ocean and animal behaviors it should not be considered a completely foolproof system. 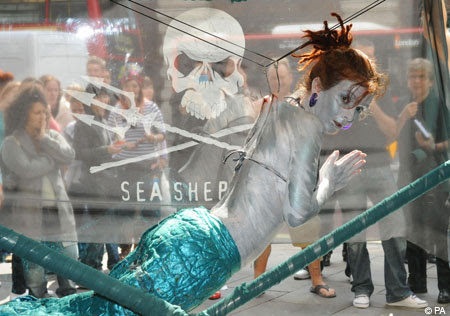 And THIS will save sharks?

As the months grind on for the seemingly rudderless Sea Shepherd organization they continue to resort to more frantic, ill timed, ill advised "stunts" to raise awareness and ultimately collect money from donors.

The litany of outright fabricated news and bad eco theatre goes back a few years but the desperation in this latest stunt set in London is sadly almost palatable. This is an organization whose messaging has become more important than affecting actual change.

Darwin was right and Sea Shepherd is proving, in a most spectacular manner, that evolution is a fickle mistress. What you are seeing here is the death throes of an Eco Dinosaur who's time on this planet is coming to an inglorious end. Like the reign of the dinosaurs Sea Shepherds demise will be slow and sad to watch, but the first coughs, staggers and sputters are here.

Suffice to say the final days will not be pretty.

Labels: get back in the ocean and actually save some animals guys, protest, sea shepherd, tasteless
Newer Posts Older Posts Home
Subscribe to: Posts (Atom)