The Maven of Data is back, Dr Shelley C. Clarke, and a new video/online look at the shark fin numbers.

BTW we are big fans of Dr Clarke:

"Data on shark harvests have always been poor. What the new trends suggest, Clarke says, is that "if we're going to have any hope of managing shark populations, we're going to need far better data." In particular, she says, there is a growing need for observers on fishing boats and for more comprehensive trade figures on sharks. The observers, she says, are needed to begin collecting reliable, international data on where sharks are being caught, their size, their maturity, and their species."

Oh but wait! There are reliable sources on the Internet right now to ascertain not only shark species, but regional fishing pressures, volume of trade, end user volumes, and even misidentified and mislabeled fins.

And where would this magical database be you ask?

Online shark fin trading. You know, where a seller seeks a buyer and makes a transaction? Never heard of it? Are you even aware that many thousands of pounds of shark fin are sold globally online each and every day?

We said it before and even suggested, much to the ire and moronic disposition of few tiny brained sharktavists back in 2010, that the entire online trade of shark fin might in fact be - compromised.

The data coming from a "discreet ownership" in these few trade platforms online would be invaluable. We would know for instance where new and emerging markets were seeking shark fin, where dumps of species might indicate harvesting of breeding areas. If set aside marine areas were in fact failing or working. Age, sex, deep water vs in shore species.

The fact is, and we have said this before, shark and ocean conservation efforts are for the most part small in scope. When real time shark fin data is as reliable as the metric tonnage of fin that is sold and traded each and every day, but not used by those seeking solutions to the shark fin problem, one has lick ones palm and slap it loudly on the nearest forehead.

Ladies and gentlemen, there are actual real time solutions to this stuff. You just have to have the vision and bandwidth to seek them out. Or stay in the dark.

The choice is yours. 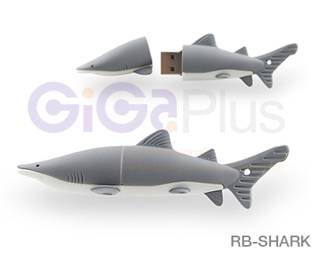 From time to time emails come in with shark based tech that's too cool not to share.

This is one of them. Enjoy.

This is Charlene from Gigaplus, with a professional OEM/ODM manufacture in USB flash Drive. I am writing to you because we found that one of our products is suitable for your promotion.

Nowadays, people would like to use the USB Flash Drive with printing their logo for promotion because USB not only can be as an office tool but a gift. What’s more, your clients would love to receive the special & unique gift from you. So do you have any idea of sending a gift for your clients? If yes, our Shark Shaped USB is best choice to represent your company’s image. What do you think?

If you need, please kindly let me know your expected quantity & capacity so that I can check the price for you.

Also you can send your logo & I will let our designer to make the artwork for your reference.

Should you have any questions, please feel free to ask you.

Looking forward to your reply.

Labels: just plain tech, not an ad, seriously, shark usb, sharky, we did not get paid a cent to put this up
Newer Posts Older Posts Home
Subscribe to: Posts (Atom)