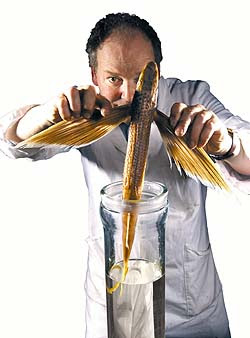 Oliver Crimmen is on a mission to discredit the global commercial shark diving industry.

In a rather non scientific main stream news piece this week, more a hysterical diatribe, he makes assertions based on his first hand hearsay that operators in the Sharm el Shiekh region are filling wetsuits with meat to attract sharks.

"I've heard stories of people wanting to film fake shark attacks, and actually stuffing diving suits full of meat and chucking them in the sea to provoke one".

Stunt work with sharks is nothing new, but usually these stunts are well known and well publicised and our industry generally views those who conduct stunts with sharks with complete disdain. In a time of profound shark crises, stunt work with sharks does nothing to help the animals "professional" shark tourism operations make a living with.

Stuffing wetsuits with meat of any kind to provoke a shark attack is not only disrespectful to the animals, it is the hallmark of self centered, ignorant, and sloppy operations.

Perhaps Mr.Crimmen is confusing stunt work with sharks at other sites to recent attacks in the Sharm el Shiekh region, or perhaps Mr.Crimmen, who is a staff member at Natural History Museum in London, should stick to facts and not publicly slander our industry without substantive proof.

It is one thing to come to the most unfortunate series of shark attacks in recent recorded history with facts, like the discovery of dead sheep dumped in the region in the months prior to these attacks. It is quite another to pull unknown and unverified factoids about meat filled wetsuits and inject them into the already over sensationalized discussion of what caused these sharks to attack swimmers.

Let's try and bring the conversation down a few notches. The commercial shark diving industry is not to blame in Sharm el Shiekh, as yet known, and any major media conversation to the contrary, without all the facts, damages the efforts responsible shark tourism operations worldwide are currently engaged in.
Posted by Horizon Charters Guadalupe Cage Diving at 2:49 PM No comments:

The bill was originally introduced by Representative Diego Tenorio Benavente into the CNMI House of Representatives, where it was approved on November 17th.

The landmark bill recognizes sharks to be “an essential element of the ocean’s ecosystem” because of their role as apex predator of the sea. It seeks to stop the severe over-fishing of sharks that occurs worldwide in order to feed the status-driven demand for shark fin soup.

The bill makes it “unlawful for any person to possess, sell, offer for sale, trade, or distribute shark fins in the CNMI”. The bill is similar in that regard to one recently passed in the State of Hawaii. If signed into law, the CNMI will join another Pacific island nation, Palau, which has also taken a bold stand to protect its nation’s sharks.

“The Senate’s move today takes the CNMI one step closer to stopping the shark fin trade, perhaps the most wasteful and destructive practice affecting ocean life”, said Peter Knights of WildAid. “It’s heartening to see the CNMI taking the lead among Pacific island nations to adopt tough anti-shark-fin-trade laws to protect their nation’s wildlife and resources from such destruction.”

The bill goes on to explain that sharks are especially vulnerable to overfishing because they reproduce slowly. It is the combination of overfishing and inability to overcome it via reproduction that has resulted in alarming shark population declines in recent decades.

“Increasingly, the countries most dependent on the ocean are rallying to the defense of sharks, perhaps the ocean’s most important inhabitants,” said Michael Skoletsky, of Shark Savers. “The CNMI’s intelligent decision to preserve sea life will benefit future generations and attract lucrative underwater tourism, rather than allowing foreign fisheries and shark fin cartels to plunder its resources.”

Sharks, as apex predators, play a vital role in regulating the health of important commercial fish species, population balance, and coral reefs. Despite this importance, up to 73 million sharks are killed annually for their fins, with some shark populations declining by as much as 90%. Stopping the shark fin trade is seen as a critical means to stop the depletion of shark populations.

The bill still needs to be reconciled with the slightly different version approved by the House before being signed into law by Governor Benigno R. Fitial.

Posted by Horizon Charters Guadalupe Cage Diving at 8:40 AM No comments: