For the next 6 weeks the Undersea Voyager Project will be at depth in and around targets on Catalina Island. This is the second video in a series featuring the deepest and longest dive to date.

Posted by Horizon Charters Guadalupe Cage Diving at 11:56 AM No comments:

Gulf of the Farallones The Independent Review 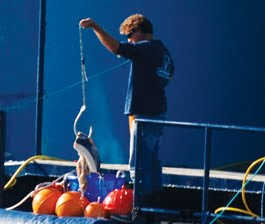 The long awaited Official Independent Review of a 2009 badly hooked shark incident at the Farallones is out and now available to the public.

While this review goes a long way to addressing the health of a badly hooked shark during Dr. Domeiers tenure at the Farallones, it fails to address many of the root problems with this entire episode.

The stakes for this review are high as these sharks are a protected species, in a National Marine Sanctuary with a long history of pro-shark protectionism that has, over the years, enabled a series of deeply restrictive rules and regulations regarding commercial and public shark viewing at this site.

Questions regarding who was baiting white sharks at the time, who designed the hooks, shark hooking protocol, and many more are left unanswered in this review.

In fact the very nature of this "research" is in question as the research vessel, crew, and funding for this "research" came from Chris Fischer with Fischer Productions who was, at the time, shooting the entire effort for a multi-part National Geographic series called Shark Men.

The Farallones Manager Maria Brown and her staff knew this. What she signed off on was a hybrid operation comprised of members of Dr.Domeiers staff and that of a film and television production crew.

A crew that also touted a Hollywood actor as participant member (see link).

Never in the history of the sanctuary system, as far as we know, has such a crew been given the green light to bait (with whale meat) and hook a protected species within the boundaries of a National Marine Sanctuary, and no where in the recently released independent review is there mention of this.

So, what ultimately happened?

We might never know. The simple fact is the underpinnings of this review needs to address how the future of shark science is done within a National Marine Sanctuary. If commercial shark diving companies cannot bait, tow decoys, or even be within 164 feet of a white shark then the rules regarding hybrid film and television productions that are doing invasive shark research should be even more restrictive.

There's a white shark with 3/4 of a hook embedded in it's throat right now, a hook the size of a small dinner pan and to this day we have no idea who was on the other end of that baited line. Was that person a production member, or a scientist?

That this shark is still alive should come as some measure of relief to those who signed off on this project.

The fact that the recently released independent review makes no mention of this film and television production with its "trained staff" operating within a National Marine Sanctuary bodes badly for the future of the sanctuary program in general. It also speaks to the continued poor decision making of allowing Hollywood productions to conduct invasive shark research.
Posted by Horizon Charters Guadalupe Cage Diving at 9:39 AM No comments:

The porbeagle is one of the top marine predators in the North Atlantic. However, little is known about its biology, abundance, or spatial ecology there. Results are presented on the migration and behaviour of three porbeagles tagged with archival pop-up tags off Ireland between September 2008 and January 2009. One shark migrated >2400 km to the northwest of Morocco, residing around the Bay of Biscay for approximately 30 days. The other two remained more localized in off-shelf regions around the Celtic Sea/Bay of Biscay and off western Ireland. The sharks occupied a broad vertical depth range (0–700 m) and a relatively limited temperature range (∼9–17°C), with notable variations in diving behaviour between individual sharks. There were distinct day–night differences in depth distribution, each shark being positioned higher in the water column by night than by day. Night-time depth distribution also appeared to be driven by the lunar cycle during broad-scale migration through oceanic waters. Our results show that porbeagles occupy and traverse regions of high fishing activity where they are potentially vulnerable to population depletion. Such large-scale movement outside the ICES Area underlines the need for international coordination in their assessment and management.

Posted by Horizon Charters Guadalupe Cage Diving at 8:47 AM No comments: