Chatham - While the shark sightings keep rolling in, it's not clear exactly how many great white sharks are out there, officials have said, because sharks could be sighted more than once. Williams said the Division of Marine Fisheries doesn't count the number of sightings because "that's just not valuable data."

Discovery Networks released the first in a series of internal video conference calls with their new Director of Programming, Matt Mann.

Apparently Mr.Mann is no fan of Shark Week for reasons that boggle even our very lively imaginations here at Underwater Thrills, and we thought this was about making sharks look bad.

Kudos to George P for the video find.

WARNING: Foul language, coarse syntax, and a few slams on MythBusters in this video.

Ironic Spoiler Alert - how the media overreacts to shark attacks, brought to you by Shark Week 2010 and a show called Shark Bite Beach.

How does Shark Week get this kind of positive media promotion? With a 5 dollar T-shirt and a holographic poster apparently. Sigh.

Now the question we're all asking, who shot this?

Posted by Horizon Charters Guadalupe Cage Diving at 11:56 AM No comments:

The Problem With "Shark Identities" 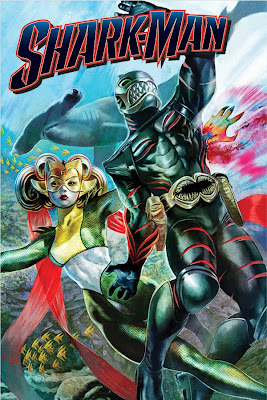 A post over at Da Sharks blog about Eric Ritter caused me to think out loud about Sharkitarianism.

Distilled down to its simplest form Eric Ritter's entire raison d'être is sharks. Not necessarily such a bad thing as many fine folks identify with sharks and use that passion to ultimately do fantastic things for the species in one form or another.

What Ritter and far too many others, as far as I am concerned, suffer from is what Da Shark has aptly coined Sharkitarianism, a complete shark identity.

Without it, these people who are in every facet of our industry, would be just "regular folks" with job descriptions ranging from welders, to bank clerks.

With Sharkitarianism people interact with sharks to heighten an identity, or to become someone new, more exciting, more interesting.

These people use sharks, they do not interact with sharks. Sharks are a conduit for media attention, industry attention, and attention at dive shows. Sharks are the unwilling silent partner to grander ego ambitions, a dangerous stage set by which those who suffer from Sharkitarianism perform stunts with sharks calling these stunts shark awareness, or worse shark conservation and research.

Sharkitarianism is a bane to our industry.

To be a self styled sharkman or professional shark diver (unless you're Christin Zenato who is a complete professional) is the highest point of conceit in a relationship with these animals that should always have a moment where the dive gear is rinsed, put away, and you go back to your life, not take that life back into the terrestrial world seeking gratification for deeds done, days, weeks, months and even years ago.

This deep identity attachment to sharks clouds judgement, shuts down rational thought, and causes the individual to pursue sharks in ever more creative means to fill and build their ego, maintaining the identity.

As an industry member take a step back today consider your shark identity, are you Sharkitarian?
Posted by Horizon Charters Guadalupe Cage Diving at 7:38 AM No comments: