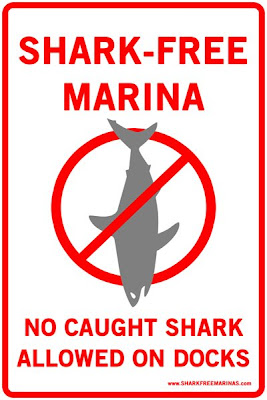 Shark- Free Marinas has a singular purpose, to reduce worldwide shark mortality. Today the not-for-profit company launches its strategy which intends to prevent the deaths of millions of vulnerable and endangered species of shark. The initiative aims to win over the fishing community by working with game fishing societies, tackle manufacturers, competition sponsors and marinas to form community conscious policy.

In the last five years over a half million sharks on average were harvested annually by the recreational and sport-fishing community in the United States alone. Many of these were breeding age animals and belong to vulnerable or endangered species. Research has shown that removal of adult sharks from the population is occurring at such an extreme rate that many species stand no chance of survival, severely damaging the delicate ecological balance of the oceans ecosystem.

“There’s a lot of talk about the atrocity of shark fining and fishing worldwide” says the SFMI’s Board Director, Marine Biologist Luke Tipple “but not a lot of measurable action towards reversing the damage. The time has come to stop simply ‘raising awareness’ and start implementing sensible management techniques to protect vulnerable species of sharks from inevitable destruction.”

The Shark-Free Marina Initiative works by prohibiting the landing of any caught shark at a participating marina. By promoting catch-and-release fishing the sport of shark fishing can actively participate in ongoing research studies and collect valuable data. The initiative is based on the Atlantic billfish model which banned the mortal take of billfish in response to population crashes in the 80’s.

“Although the number of sharks killed by recreational fishermen each year is dwarfed by commercial catches, the current crisis facing shark stocks requires action wherever possible.” says marine scientist and SFMI Advisor Edd Brooks “We are not asking fishermen to stop fishing, only asking them to start releasing their catch.”

Collaborating with the Cape Eleuthera Institute in the Bahamas and the Fisheries Conservation Foundation in the USA the SFMI has had an early impact with interest from marinas and non-profits nation-wide. Currently Shark-Free Marinas is able to subsidize the cost of signs and literature but hope that future investment will help make a nationwide impact.

“Shark-Free Marinas is a necessary response to the culture of mature shark harvest” says Tipple “Our effect will be immediate, measurable and, together with saving millions of sharks, will establish a new global standard for responsible ocean management.”