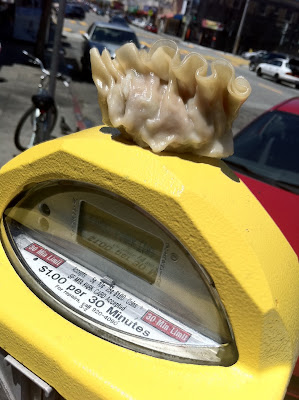 Unassuming, some say tasty, and sold by the thousands each and every day in San Francisco for 30 cents each.

The Shark Fin Dumplings days might well be numberered as the California Assembly voted this month to ban the sale, possession and distribution of shark fins, handing a victory to environmentalists who have been lobbying to curtail a trade that targets sharks to produce an Asian delicacy.

As many as 73 million sharks a year are killed for their fins, which provide the key ingredient in shark fin soup and these Dim Sum staples. Both Hawaii and Washington state, along with Guam and the Northern Mariana Islands, have enacted laws banning sale, possession and trade of shark fins, while Oregon and California are considering legislation to do so.

The revised bill under consideration includes a one-year grace period so businesses can sell off their stocks of shark fins, as well as an exemption to the possession provision for fishermen who are legally fishing sharks off the California coast.


For the humble Shark Fin Dumplings time may well be running out as the next step is a full consideration by the senate.
Posted by Horizon Charters Guadalupe Cage Diving at 8:04 AM No comments: