We are pleased to announce that Luke Tipple, Director of SFMI, will be interviewed on the The Captain Mel Show, Saturday Jun 20th.

Along with a full open hour a 6 AM — and the next two hours our special guests include Mote Marine’s shark expert Dr. Bob Hueter and — Luke Tipple, Director of the Shark-Free Marina Initiative – plus lots of your phone calls – 6 to 9 AM every Saturday on Florida’s most popular radio fishing program — The 970-WFLA “Capt. Mel Show.” Call in – Listen in!

You can listen in by following this link

Captain Mel has been promoting Shark Conservation and catch and release for almost 20 years, here’s what he has to say on the issue:

Catch & Release: What a Concept!

You would think that me, “a reformed meat fisherman” would take these things in stride – go with the flow. But I gotta tell you – seeing a beautiful, hapless big tiger shark dragged in dead off the New England coast a few years back by a group of guys hoping to win a prize– really turned me off. And to compound the matter, many of the “no-nothing about fish and fishing” TV media hailed these men as “conquering heroes”

”Wow, that was some catch,” mused one lame TV interviewer. “How big was that baby.” “1100 pounds” said one of the anglers. The sad part is that a magnificent animal was killed – and those guys were six minutes late. So they didn’t even cash in on their ill begotten spoils.

I know, I know. Many reading this could be thinking “what a shark hugger!” But the more I see the destruction of some of nature’s most impressive creatures for such mundane reasons, the more I realize that kill tournaments have to go the way of the horse-drawn carriage and Hula Hoops. It’s just plain sad.

As a 40-year resident of the Sunshine Sate, I can recall the common sight of massive sharks, tarpon, amberjack and other leviathans of the deep hung unceremoniously to rot in the sun. Even then I felt twinges of anguish of the fate of these creatures.

Many of these great denizens of the sea had their lives terminated because of the proliferation of so-called kill tournaments throughout the state at that time.

These days, most of us have concluded that there is no valid reason for kill tournaments – especially since we have such great new tools like digital cameras and other new age devices for recording and reporting one’s catch.

This great concept was pioneered several years ago by Capt. Richard Seward and his colleagues of the Tampa Bay CCA Chapter. These days, catch and photo release contests are the norm with the great majority of tournaments and organizations<

In the more than 20 years that I have been hosting my 970-WFLA radio show, it’s been an inspiration to see the trend — “Catch and release.” That’s the mantra of many, if not most Florida sportfishers. Basically, these folks want to make sure that their “fishing partners” – the fish — are happy, healthy and multiply.

Does this mean that I think we shouldn’t take an occasional fillet or two – or even three home for dinner? Absolutely not. I personally enjoy a nice fillet or two on frequent occasion. Yet, is it my job to feed the neighborhood? Do I need the “gee-whiz” experience of laying out dozens of dead fish on the dock? Why would you?

Fish are most attractive and fun when they are alive and vibrant. So why not take a quick picture — and put that critter back so it can rejoin its kinfolk in the deep.

And please, take the time to learn how to best release all target species so that they survive the experience.

Experts recommend that it’s best to leave the fish in the water and use some kind of needle nose pliers or release device to let them go. And if you must lift a fish out of the water to pose for a picture, remember — that creature was designed to spend its entire life in a horizontal position. So when taking pictures, hold the fish horizontally with wet hands – avoid using a towel or rag – take you pictures and return that baby to the water as quickly as possible.

My pal “The Mad Snooker” (Capt. Dave Pomerleau) often says, “try holding your own breath for the entire time you have a fish out of the water. Then you will have some idea of how the fish feels.”

Now if only we could somehow bottle that “Florida catch and release spirit” and export it to other parts of the U. S. and the world. 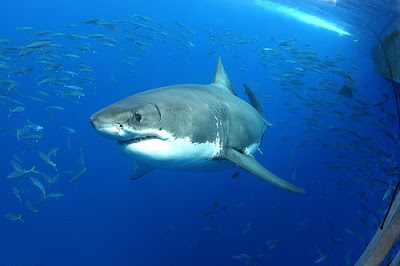 In 2006 the idea of the Isla Guadalupe Conservation Fund was hatched by a group of forward thinking shark diving operators, and shortly after Shark Diver created and launched the non profit website and outreach efforts at Guadalupefund.org

Your dollars go towards shark conservation and detailed understanding of local shark populations through science.

The operators on the front lines of tagging and tracking shark research and support for the past 7 years at Isla Guadalupe are the following. These are the operations who have consistently donated time, money, and energy towards local sharks well beyond their commercial side:

Found on Felix and Wolfs blog this morning. We would have to concur their assessment of this shark conservation campaign:

Save Our Seas Foundation has done it again, with the help of Saatchi & Saatchi in South Africa.

Together they developed a campaign in aquariums with stickers that "inside out" on shark tanks - so the message was actually to the sharks and read: "Warning - Predators beyond this point - Humans kill over 100 million sharks each year"

Editors Note: Brilliant, kudos to all for the idea.
Posted by Horizon Charters Guadalupe Cage Diving at 12:05 PM No comments:

HONOLULU -- New efforts are under way to ban commercial shark feeding tours on the Islands.Hawaii Kai lawmaker Gene Ward on Wednesday announced the formation of a shark task force to eliminate commercial operations except those with educational and scientific purposes.

The group wants to enforce a state law that makes it illegal to feed sharks within three miles of shore.

The formation of the task force comes about two months after Hawaii Kai community members strongly opposed a shark tour in their area, which ultimately caused a planned operation in Maunalua Bay to be called off.

Posted by Horizon Charters Guadalupe Cage Diving at 11:54 AM No comments: