ABC News has coverage of the video that BP wanted hidden from the media claiming content rights. After White House intervention they released the following clip. The white plume is a frozen gas slush, followed quickly by oil. It was one these gas eruptions that caused the original drilling platform to explode in a fireball 21 days ago.

Five teams won the right this weekend to compete in the final round of the Guy Harvey Ultimate Shark Challenge - an innovative shark tournament uniting sport fishing, science, business and humane interests as never before.

The Challenge is a catch-and-release only competition off the Southwest Florida coast in which fishermen compete by catching sharks and scientists tag the sharks for conservation research purposes to learn more about the animals' travels in the wild. The Challenge is designed to be a "next generation" model for shark fishing competitions, supporting shark protection while providing the excitement that spectators and anglers have come to expect.

A select group of nine teams was chosen to fish in the qualifying round on May 1 and 2 out of Burnt Store Marina in Punta Gorda. The five high-scoring teams will fish the Grand Championship Finale on May 21-23 at Mote Marine Laboratory and Aquarium in Sarasota.

"I honestly feel we're making history here," said Sean Paxton. He and his brother, Brooks, known as the Shark Brothers, are creators and directors of the event along with co-Director and Associate Producer Capt. Robert Moore. The directors said: "Our vision was to combine the goals of sport, science and conservation collaboratively and effectively. We've already achieved that in the qualifying round, and this is only the beginning."

The 8-foot, 2-inch female bull shark was fitted with a satellite-linked tracking tag by scientists from Mote's Center for Shark Research on the morning of Saturday, May 1. By the following Tuesday, May 4, the tag had sent a number of transmissions showing that the shark was about three to four miles offshore of where it was caught, tagged and released. Mote scientists will continue to track the shark's movements and a website displaying the tracks will be available for the public very soon.

"It's especially important that we satellite-tagged a mature female, because she may lead us to where she's mating or giving birth to pups," said Dr. Robert Hueter, Director of Mote's Center for Shark Research, who oversaw all scientific aspects of the tournament. "When it comes to mating grounds for bull sharks, we know zero."

Finding and protecting these mating grounds and "nurseries" where shark pups shelter and grow is important for conservation and management of shark populations. The tournament's scientific goals include satellite tagging a mature female great hammerhead shark - considered "endangered" by the World Conservation Union (IUCN).

High winds and choppy seas may have lessened the chance for catching great hammerheads and other target species during the qualifying round. Also, unusually cold weather this year may have delayed movement of the sharks' prey fish into the area. Tournament organizers are optimistic that more chances for satellite tagging will arise during the Grand Championship.

Tough fishing conditions didn't dampen the anglers' spirits. "You guys really shined," said Co-director Moore during the awards reception Sunday evening. "We've got some real professionals here. I want to thank and acknowledge all the teams and observers. These guys are the stars of the show."
The public can watch the five remaining teams compete in the Grand Championship on May 21-23 at Mote Marine Laboratory and Aquarium. Spectators onshore can enjoy an exciting and educational multimedia experience, including video feeds from the heart of the action. Learn more at the tournament website: http://ultimatesharkchallenge.squarespace.com/

Media: Low-res photos of catching, tagging and releasing of sharks are available, along with high-res photos of the tournament participants. Please contact Hayley Rutger, Mote Public Relations Specialist, 941-374-0081 or hrutger@mote.org.Media are welcome to attend the Grand Championship Finale at Mote, 1600 Ken Thompson Parkway in Sarasota, Fla. Please RSVP to Hayley.
---
About the tournament: The Guy Harvey Ultimate Shark Challenge was developed in 2009 when Sean and Brooks Paxton approached Mote's Dr. Robert Hueter about the idea of an innovative catch-and-release shark tournament. Together with Capt. Robert Moore, the group then teamed up with renowned marine wildlife artist, scientist and conservationist Dr. Guy Harvey to present a model for responsible sport fishing that promotes shark protection. This "next generation" shark competition has been endorsed as a more humane alternative to traditional catch-and-kill tournaments by the Humane Society of the United States and is also supported by the Shark-Free Marinas Initiative and Fishpond USA.
Posted by Horizon Charters Guadalupe Cage Diving at 12:56 PM No comments: 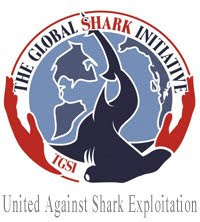 If there was an award for shark passion it would go to the diverse team behind the Global Shark Initiative and the close to 12k shark fans who have rallied behind this cause.

From the outset this is smart and tactically correct shark conservation direction and with the amount of embedded conservation star power being allied here this group looks like it will make a huge difference in the near future.

Kudos to all involved.
Posted by Horizon Charters Guadalupe Cage Diving at 12:25 PM No comments: 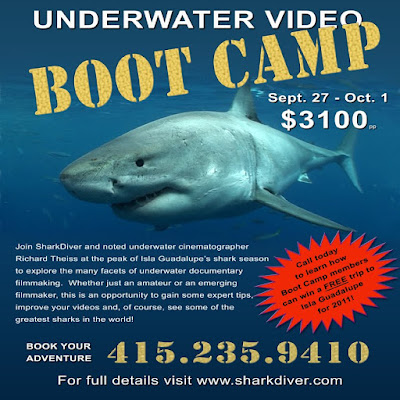 2010 will feature some exciting developments at Isla Guadalupe.

One of which is filmmaker Richard Theiss's Underwater Video Boot Camp.

Divers and budding filmmakers joining him this season will learn the ins and outs of documentary film making, with each producing their own final 5 minute documentary.

These mini shark conservation productions will be judged by a panel of noted cinematographers with the winning entrants receiving a free expedition back to Isla Guadalupe with Shark Diver in 2011.

All entrants will be highlighted on a new You Tube channel as well.

Join us in 2010, and discover the wild world of white sharks and film making with RTSea and Shark Diver call today!
Posted by Horizon Charters Guadalupe Cage Diving at 9:21 AM No comments: 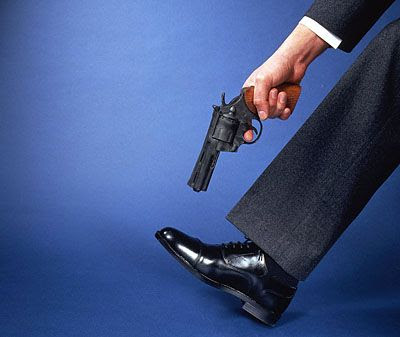 Who bears the ultimate responsibility for America's Chernobyl off the Gulf coast?

If you asked an oil executive on Capitol Hill yesterday you got a Circular Firing Squad answer tailored by $800/hr corporate lawyers.

The blame game has begun, while an estimated 5-25,600 barrels a day explodes into the pristine waters of the Gulf.

For lawyers on both side of this on going eco disaster big oil equals big money.

BP's legal teams in the Gulf are already into questionable legal waiver practices making sub contractors working on oil clean up projects limit the amount of money they can accept to a one time payout of $5000.

"Pay all legitimate claims," is the current catch phrase for oil executives that leave them in a titanic grey area almost as big as the oil slick now covering the Gulf.

One thing is for sure, when the final bill does come for this mess, BP, Transocean and Hallibuton will be paying out on a three tiered system. House legal team first, opposing legal team second, and pennies on the dollar to whoever and whatever is left of the once magnificent Gulf.
Posted by Horizon Charters Guadalupe Cage Diving at 6:06 AM 2 comments: