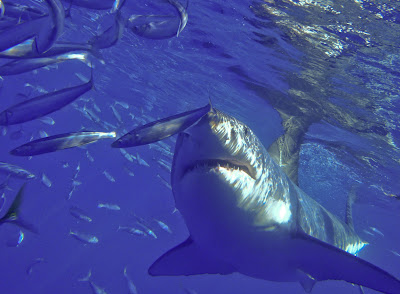 After  a fair ride to Guadalupe, we were greeted by a beautiful sunrise and perfect conditions for Shark Diving.

Calm seas, current and no other boats around and just as we got started with diving, a full breach, with the Shark actually touching the boat on the way down! What a way to start out! The entire day was full of Shark action, with 6 different sharks competing for our attention.


Day 2 of Shark Diving started at 7am with an open rotation.

The lucky few that woke up early were in for a treat. "Jaques", a  16ft. regular at Guadalupe put on a show for the divers. The day continued to bring in a bunch of other Sharks, some coming right up to the cages, including one that investigated the corner of our port cage very, very closely! ..... oh, did I mention that we had another full breach just off our bow?

Since we had such great action during our 7 am rotation on the second day, we started out with everyone wanting in. The Sharks must have decided that Sunday was a good day to sleep in and there was not much going on during the first hour. Having been spoiled the first couple days with continuous great action, only a few divers decided to go in for the later rotations. The ones who did got rewarded. Big time! "Smiles", another regular, that we haven't seen in the past 2 years, showed up and put on a show for the ones in the cages, as well as everyone on deck.

Passing very close to the cages, looking the divers straight into the eyes. Everyone was excited.
The ride home started out a bit rolly, but by dinnertime it was a lot smoother and it continued to be nice for the rest of the way home!

I love my job!

About Shark Diver. As a global leader in commercial shark diving and conservation initiatives Shark Diver has spent the past decade engaged for sharks around the world. Our blog highlights all aspects of both of these dynamic and shifting worlds. You can reach us directly at sharkcrew@gmail.com.
Posted by Martin Graf at 3:23 PM 3 comments: