With less than 4000 white sharks estimated to be left on the planet, video of this 12-14 foot animal struggling for life with no hope for anything but a sharp knife is...heart wrenching.

White sharks in Mexico are under siege, making sites like Isla Guadalupe rare safe areas in the life cycle of these magnificent animals. This shark was taken in February of 2010:

Meeting the Media: Be Prepared! 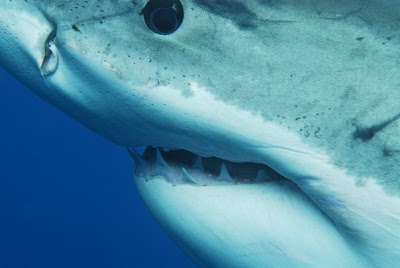 Recently the Voice of Russia posted a story "Meeting a Shark: Be Prepared!"

In the annals of sideways media reportage on sharks this particular article got the attention of one Doc Gruber. His article comments serves as a smart, fact filled template, on effective pro-shark media response.

Dear Voice of Russia: Thank you for allowing me to comment on your article Meeting a Shark: Be Prepared. In all my 50 years of professionally studying sharks I do not think I have ever read an article so full of clichés and downright misinformation than reporter Yelena Kovachich has produced. Russia is a nation with many experts on shark biology (for example Dr. Feodor Litvanov flit@atlant.baltnet.ru) so it is clear to me that Yelena did not do her homework.

I will give a few examples but one concern is the swindle that the Sochi Aquarium seems to be running. Training divers on how to respond to sharks is just a scam. The explanation given by your reporter shows that the Sochi program directors know noting about swimming with sharks or shark behavior. They seem to be just pandering to the fears caused by such mythical stories as Jaws which irrationally frighten the public. Then they have the nerve to charge them to play right into the fears that they themselves created. Just one more point: thousands of divers spend tens of millions of rubles annually to swim with sharks and they mainly prepare with cameras!!

Ok—on to some of the misinformation: Yelana states that Divers show people how to hide from them among coral reefs—do you think someone could actually hide from a shark? They can sense you sounds and even the electrical signals from you metallic dive gear!! Why would someone need to hide from a shark?

Your chances to survive if attacked by these creatures are slim to none-- Patently untrue. You chances of surviving an attack are better than 100:1 as the three Russian shark attack survivors learned. On the other hand your chances of being attacked while in the water are about 5,000,000:1.

Sharks can sense tiny amounts of blood - even a single drop - in the water up to 5 kilometers away and trace them back to their source. Again patently untrue. Shark can not detect blood at all. They do sense amino acids present in some kinds of blood but do not seem that interested in human blood. In any case sharks detect dilutions of around 1 part amino acid to 1,000,000 parts of water. This means that if you dilute a drop of blood in 1000 liters of seawater a shark could barely detect it. Can you imagine the amount of water in 5 km of ocean? Pure nonsense.

Three people will be enough to scare a shark away. Where did this number come from? There were more than three people in the water when the unfortunate Russians—all three were bitten.

The largest sharks known - the great whites - dwell along the east coast of the USA. They regularly attack people, confusing them with their top menu selection - sea lions and seals. Here is a sentence with four pieces of misinformation. 1 The larger shark is the whale shark Rincodon typus; 2. White sharks being warm blooded dwell pretty much where they want—inshore to open sea, topical or temperate seas. 3. Great whites do not regularly attack people and even considering the tiny number of attacks, are not even in first place. That dishonor belongs to the bull shark, Carcharhinus leucas. 4. Great whites are not confused by people nor is their main food sea lions which incidentally are only found off the west coast of the US, not the east coast. And while they do eat seals and sea lions during the pupping season they also eat many varieties of fish and other sharks.

Need I go on? Here is my thought on the subject: How many citizens of Russia and the Ukraine have enjoyed holidays in Egypt’s Sharm area? Of those how many have been bitten by sharks? Nearly all of them have been exposed to sharks while swimming in the Red Sea with no negative experiences. However when humans enter the sea they enter the realm of the shark as well as myriads of other potentially dangerous species. You take a chance albeit infinitely small when swimming in the ocean. You main concern should be drowning or getting hit by a boat. Enjoy the ocean! Live to the fullest!!