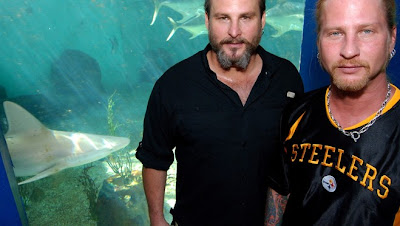 SARASOTA - Sean and Brooks Paxton, known to some as the "Shark Brothers," have dedicated themselves to marine and wildlife conservation.


And a few weeks ago they added Mote Marine Laboratory research team to their bios.

"I'd say it was like going on the greatest field trip ever," said Sean Paxton, 44, about the five-day trip the brothers spent with a Mote crew the Gulf searching and sampling for signs of oil impacting marine life, with a special focus on sharks.

"They're (sharks) feared, but they're also a threatened species, so they do need our help," Brooks Paxton said.

"The first animal was a tiger shark in excess of 10 feet, a beautiful male specimen," Sean Paxton said.

The brothers also filmed some of the trip. The footage shows that big tiger shark slamming his jaws shut as Sean headed toward him on board the research vessel.

"The other animals we encountered in the world of sharks were silkies, a scalloped hammerhead, a mako," Sean Paxton said.

Bob Hueter, who is the director of Mote's Center for Shark Research, led the research trip.

"Yes, the fish can look healthy, but inside the liver, inside the blood, reproductive organs, for example, we can find residues of the contaminants of the oil," Hueter said. "Or their behavior changes and they don't go to the right places to feed and possibly shifting not only populations but the whole ecosystem out there."

Complete post.
Posted by Horizon Charters Guadalupe Cage Diving at 8:46 AM No comments: