Oxygen Depletion and Sharks - The Myth 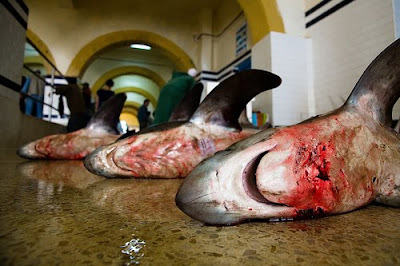 Great stuff for the most part and compelling watching, except for one glaring factoid that gets pasted into the film and almost ruins the message.

Folks, if we lose all the oceans sharks we will not run out of the worlds Oxygen.

How this factoid ever got into the broad based conservation messaging for sharks remains a mystery. Call it a case of too many shark centric people wanting to save sharks and not checking in with their facts or even bothering to question the obvious.

But check we must, otherwise those who regurgitate said factoids look like conservation village idiots when up against those in power who can effect change and who may be slightly more informed.

Let's do away with this unsupported line of reason as the facts about shark conservation are horrific and compelling enough without the addition of Fox News style gotcha shark headlines:

With 92% of our living biosphere being aquatic, almost 80% of our planet’s air is generated by the algae and microscopic phytoplankton that are found in the sea. Many thousands of fish species and other marine organisms feed on phytoplankton and algae. Sharks on the other hand prey on the fish that feed on plankton; right up through to the top of the food chain. So if we remove the sharks, as we are systematically doing at an unsustainable rate of over 70 million sharks a year, then it leaves the plankton feeders free of predation and free to gobble up the main source of our planet’s main oxygen supply!

Therefore, it is in our interest to maintain a healthy source of oxygen and air, if we want to keep on breathing!

And watch this film, like we said aside from this small part, it is a tribute to sharks and the entire team should be congratulated:

Posted by Horizon Charters Guadalupe Cage Diving at 6:06 AM No comments: