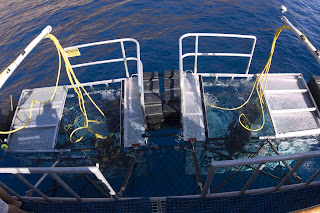 The anti shark diving lobby (for the right and the wrong reasons) is alive and well and what goes on in one place reverberates throughout an entire industry.

Florida's successful and complete ban on all shark diving activities is a prime example of how governments and agencies can make snap decisions based on incorrect information, and sometimes lack of far sighted vision.

Shark diving tourism generates millions for local economies worldwide and is, for the most part, no more dangerous then sky diving. The best case financial example of this is South Africa and Australia.

For other countries like the Bahamas, and to some degree in Mexico, the feeling that commercial shark diving operations do not put back enough into local economies is an all too valid point.

Without dialogue between the commercial operators and the agencies and governments who would over see their activities-the opportunity to build on world class shark eco tourism with proper financial re numeration to territorial governments gets quickly lost in a spiral of misinformation and media hype.

Here's a quick list of governments and their agencies who are, at this moment, debating the merits of commercial shark diving within their territorial waters based on recent events.

These well known commercial shark diving sites and the media attention they have garnered are interlinked. When divers and anti shark diving proponents speak of shark diving, they often list off the top sharks sites worldwide.

Add to that a rough 2008 shark diving season with a tragic commercial vessel accident in South Africa (no fault), a well covered attack and death in the Bahamas, and a series of random (non shark diving related) shark bites and deaths up and down the California, Florida, Australia and Mexico coastlines.

What you end up with is a perfect storm of negative media with several agencies and government bodies poised to take some sort of action regarding commercial shark diving activities.

Posted by Horizon Charters Guadalupe Cage Diving at 9:06 AM 2 comments: