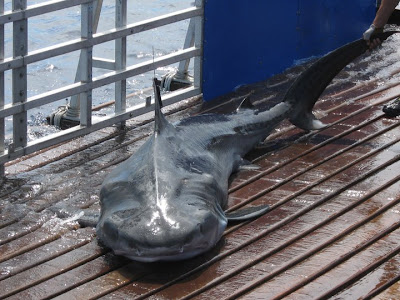 The Tiger pic is pretty cool though, ain't no bones in that shark. 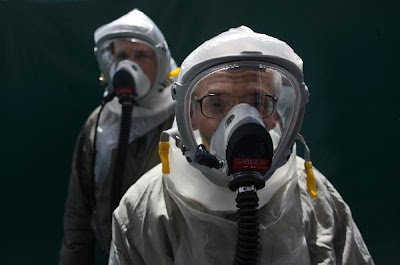 The Op-Ed was directed at industry members vying for this site and these unique and increasingly rare sharks, 99.3% are estimated to have been fished out of the Gulf of Mexico alone.

At least three websites are now inviting divers to come and dive with Oceanic whitetips in the Bahamas, and at least one operator has responded to last weeks post.

The ideas brought up are certainly worthy of further discussion and even action, if you can get past the label, "Trash Talking Blog-Dogs";)

There has been a lot of blogging going on from the trash talking blog-dogs out there lately. Mostly on how to interact with sharks and how to conduct an eco-business. Here is the deal when it comes to Eco-tourism from my perspective - shark diving tourism, and catch and release shark fishing are the sharks only hope. I am not going to go into catch and release fishing in this blog, but regardless of my opinion, or your opinion, it is a necessary evil. Not everyone is going to dive with sharks, and sport fishing is the largest spenders of trickle down economics in the marine world. So more on them later.

Here is the deal - As I said, Eco-tourism is the sharks only salvation. The reality is, whether you like it or not - Governments do NOT care about sharks, or saving sharks - or the environment - THEY NEVER HAVE, AND THE NEVER WILL! What they care about are two things...money and votes. So if you have a lot of money you can convince the government to protect sharks, by throwing them large sums - then sharks will get some protection. But, if you do not have a shit load of money, then you better have the votes behind you to keep their butts in office. Other than that, they don't care about the cause, they care about their own agendas, and keeping and sustaining their power.

For a government official to care about creating marine protected parks, or shark sanctuaries, they need to have a good reason, and that reason is money - and money now. A goverenment officials term is short so they need to make and steal as much as they can before their term is up, or they get booted out. A shark diving tax is a great incentive that puts money into a government officials pocket today and is a great way to ensure that sharks get protected in the long term. Right now the fishermen are the ones putting this kind of money into the officials pockets, so who do you think they are going to support when it is time to vote?

Anyone who believes that a government official is going to do the right thing is gravely mistaken and by the time they admit it or figure it out, it is going to be the death of the species. So the thing that is going to lead the charge for protecting sharks is creating shark parks, or shark sanctuaries, or marine reserves, or whatever you want to call it. Then bringing in eco-tourism to create a trickle down economy that will benefit and stimulate the local economy, as well as tacking on a shark tax that could go into the appropriate hands to ensure that sharks will remain protected indefinitely.

I think that continuing to protect individual species of sharks globally is a noble effort, but is it enough? Truthfully - I believe that protecting individual species is a bandaid to a much bigger problem. Honestly - Do you really think that an Indian fisherman, or an Asian fishermen in a little panga in a third world country is gonna throw back a full grown oceanic whitetip, or a scalloped hammerhead because CITES has ruled that these species are uncatchable and must be thrown back. Hell no! If they can't sell it, (which they always will be able to, regardless of any CITES ruling), they will just eat it. They are just surviving, trying to feed their families, making money anyway they can. So govenrment meetings and agendas, and conservationists hopes mean shit to them.

I wrote about this back in April but its worthy of a reminder...

-A true conservationists job and efforts needs to go into creating marine reserves, or shark parks, or shark santuaries. Of course these sanctuaries will fly better with officials if there is already eco-toruism in place. (they will see money much faster that way.)

-Another devision of the conservation/eco-operators (joint effort is a must) job is to help create a policing effort to protect the parks. Funding must be created and raised for this very important job. Parks are pointless without protection.

-MORE Eco-operators need to be invited in to help stimulate the economy and creat trickle down economics. This is always the hard part, as shark operators are often greedy and hate to see competion come in. Trust me on this one, I am very well versed in this subject.

The problem right now within the shark diving world, is there are too much politics. No one is communicating with each other, lots of back stabbing, and crying, and I'm right-they are wrong, BS. None of it works. We all don't have to like each other, we don't all have to get along, but if there really is any love for these animals, then we all need to set aside our egos, agree to disagree, and get the fucking job done.

ICCAT - Tuna are done, sharks get the nod 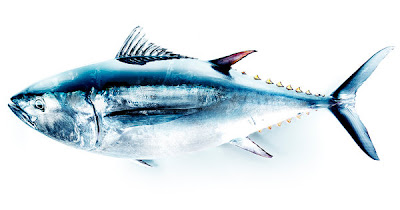 Conservation Triage is never pretty especially when species are being pushed to the back of the conservation line by commercial fishing interests.

Thus was the series of meetings in Paris last week, ICCAT, and a decision not to address Bluefin tuna catch reductions while at the same time adding some protections for sharks.

The shark protections, while hailed by many as a conservation win, mean for the most part sharks caught at sea will be dumped at sea, out of sight and out of mind to both consumers and conservation groups. The sharks are still being taken by very technically savvy fishing fleets, but fins will no longer arrive in Hong Kong to be added to bowls of soup.

For the bowls of soup conservation crowd - this is good news.

There are a few good news points to this years ICCAT, protections for Oceanic whitetips and Hammerheads.

For a fine 15 minutes of eye opening thought we have rounded up some of the after action Blue Blogs and press releases for your review, as always, great analysis:

Ya Like Dags? - Highs and Lows from the ICCAT

Southern Fried Science - Sharks get new protections at ICCAT
Posted by Horizon Charters Guadalupe Cage Diving at 8:18 AM No comments: