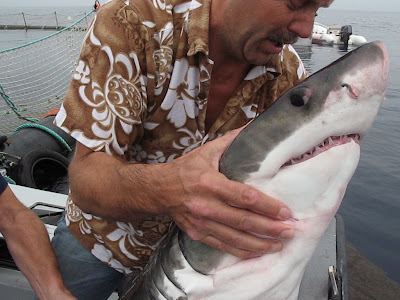 We're running through the images of the month here at Underwater Thrills and this one came up.

What you are looking at is a "rejected" white shark from the Monterey Bay program. Turns out this little critter had a slight eye infection and they tagged and released him instead.

Only the "best and the brightest" make the actual aquarium exhibit, and only after going through a gauntlet of researchers, lab guys, and vets.

Think of it kind of like American Idol for White Sharks-except no one on the Monterey team has a smarmy British accent or used to be a dancer...as far as we know anyway.
Posted by Horizon Charters Guadalupe Cage Diving at 4:20 PM No comments: 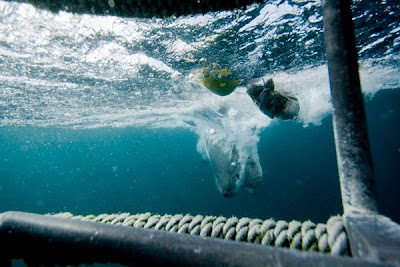 Got the following email and very cool image today from Dave owner of Sharkbookings.com

White shark diving in South Africa is always hopping, and last week was no exception:

I went out the other day and have a nice sequence of a shark trying to breach the bait. See attached. Need to get out again and as soon as the weather improves will be back out on the boat again for some more photos.
Posted by Horizon Charters Guadalupe Cage Diving at 10:44 AM 1 comment:

Conditioning to the baited environment It's pretty dry reading-but as far as it's impact on an entire shark diving industry the following report is nothing short of "revelatory".

This is also a good case for the addition of shark research in tandem with commercial shark diving operations. This school of thought is being lead into the industry by a few forward thinking operations and is slowly making headway.

Moving away from treating sharks as little more than Biological ATM's and more as sustainable resources is both a lofty goal and the future of shark diving worldwide.

The fine folks over at Rodney Fox in Australia commissioned a multi year study to see if sharks habituated to chum. An ongoing debate that sometimes reaches a fevered pitch between the anti-shark diving community and commercial shark divers, here's a quick look:

Chumming cannot habituate or condition sharks in any way since sharks cannot feed on the chum, since it is finely minced and highly diluted. Thus, it does not constitute a reward of any kind.

However, baits can constitute a reward and, if sharks do succeed in consuming some bait, conditioning is theoretically possible under certain circumstances, but would require frequent visitations over a relatively long period of time, with sharks receiving substantial rewards in each of these visits in order for the conditioning response to be established. However, the data showed that sharks actually receive more negative reinforcement than positive reinforcement under baited conditions since the bait is pulled away from them much more often than not.

Posted by Horizon Charters Guadalupe Cage Diving at 8:57 AM No comments:

Whale Sharks in the "Millions" we tells ya! 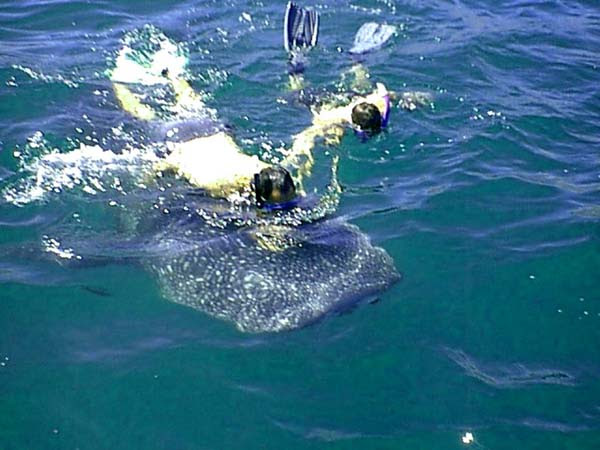 Maybe not in the millions, but for an increasing number of divers and tour operators this site has become the defacto "Valhalla for Whale Sharks".

Kind of like finding the lost City of Atlantis, or the fabled African Elephants Graveyard, except this site is in Mexico.

Here's one the the latest operations to join the pile. The cost? $2995...oh and do not forget that $695 Singles Supplement (makes you want to get married, right?) :

Just off the tip of Mexico’s Yucatan peninsula is a small island largely untouched by tourism, despite its proximity to Cancún. Isla Holbox might go unnoticed entirely, except for some unique visitors who come to its warm ocean waters each summer. Their presence is hard to ignore, since they are 40 feet long and weigh 15 tons. These are gentle whale sharks – not whales at all, despite their size, but actually the world’s largest fish. Docile and unafraid, they allow us to swim close enough to observe the checkerboard pattern of pale yellow dots and stripes covering their thick gray skin.
Posted by Horizon Charters Guadalupe Cage Diving at 8:12 AM No comments: