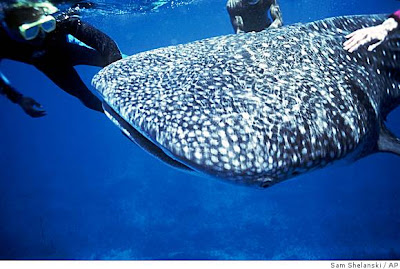 Utila (U-Tilla), Honduras is home to dollar beers and one of the coolest bars set in a tree in the entire region. It is also home to Whale Sharks and a nascent shark diving industry.

Now, a new film has come out that tackles the many issues of commercial shark diving head on. If the films trailer is any indication-this should be a landmark documentary:

Big Fish Utila does more than impress the audience with breath taking pictures and fantastic music. It is a look at a shark and an island, and how the two are intrinsically linked and inter-dependant. It is not an advert for the whale shark tour industry or for Utila. The filmmakers strived to create an honest account of a habitat that is being damaged by a population that is growing too fast. It looks at both the fishing and tourist industries with a view of making them more accountable for their actions, whilst trying to understand their point of view. It also gives space to in-depth information about the shark and on emerging technologies that are helping to give us more vital information.
Posted by Horizon Charters Guadalupe Cage Diving at 6:15 PM 3 comments:

Sonja Fordham-If you don't know her you should

This years Shark Week enlisted the help of notable shark advocate Sonja Fordham to help dispel the myths surrounding sharks. What they got was one of our brightest voices in the world of shark conservation, tourism, and sustainable seas:

As top predators, sharks have helped keep oceans in balance for hundreds of millions of years and have provided food, leather, oil, weapons and decoration for thousands. Much more recently, sharks have emerged as a source for recreation, through diving, snorkelling, fishing and viewing in aquariums. There is no shortage of controversy surrounding these relatively new uses of sharks.

For starters, many people have concerns about shark-feeding dives; they fear such activities might alter shark behavior and condition sharks to associate people with food, resulting in bites that could fuel the already negative perception of sharks. On the other hand, shark ecotourism can dispel myths about sharks and may inspire action on their behalf. Revenue from shark diving supports powerful economic arguments for keeping sharks alive (see this blog's entry on devil rays). Most proponents of shark ecotourism agree that strict guidelines for conduct should be in place.

Recreational fishing can have a significant impact on sharks. Scientists note a substantial dent in East coast shark populations in the 1970s, after "Jaws" sparked interest in sport fishing for sharks. Since the early 1990s, the government has increasingly limited U.S. Atlantic recreational shark catch while the popularity of catch-and-release fishing has increased. In recent years, the Humane Society (www.hsus.org) has gained attention and support for their efforts to end shark "kill" tournaments in the U.S. Atlantic. Of particular concern is tournament take of porbeagle sharks, as this species is regionally endangered.

Some groups have criticized aquariums for keeping wide-ranging sharks, such as great white and whale sharks, in captivity. Others say that the public needs to see these creatures to appreciate and fight for them, and that the number of individuals in aquariums pales in comparison to the number killed in the wild each year.

These are indeed controversial issues. We're wondering where you stand and invite you to share your perspectives.