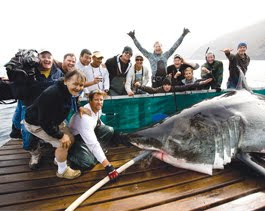 Perhaps the biggest shark controversy in the western hemisphere is about to play out this week at the Farallon Islands - and no one it seems, is happy about it.

Just 27 miles off the coast of San Francisco these small, protected islands, are home to some of the largest white sharks in the region.

This week the same team who caught and tagged white sharks at Isla Guadalupe, Mexico in 2008 will be at it again, this time at the Farallons.

White shark fishing was banned in California over 15 years ago and it is only with special permits that this team is allowed to catch these animals. Therein lies the controversy. Fishing for white sharks.

The team is lead by Dr. Michael Domeier from The Marine Conservation Science Institute in San Diego. We have been supportive of this team for the past few years. Mainly because they have an established track record for working with white sharks that few others have.

The hooking of any white shark is a traumatic event, but the data that comes back from specialized tags that are drilled into dorsal fins gives researchers a window into the world of the white shark that few other tagging methods deliver. Sat tags are notoriously finicky with a high failure rate. These tags allow researchers minute by minute updates and last for years.

With enough of these invasive tags in place we should, in just a few years time, have absolute and definable small scale and large scale movement patterns of a large sampling of the western pacific white shark population.

We would rather see a professional team do this kind of very specialized tagging work. NOAA, the agency for permit approval, has chosen well. Still many are abjectly opposed to these tags and the manner in which they are applied.

The bigger question is not so much the work that is being done, rather the film crews who will be accompanying the effort. It's a double edged sword when you look at any invasive animal technique and film and television productions.

Short media samples of the Guadalupe production are causing a backlash from the community.

While images like the one featured in this post cannot be helped, the perception that this work is in anyway "fun" are what harm the effort. Media control is, as we have always said, 90% of perception.

Gentlemen, a word of media advice from those who know.

Lose the "Cool Dude Shaka images" standing next to captured white sharks. In the end these images will dog your continuing efforts for years to come.

Let's hope Nat Geo's handling of your tagging program is as serious as the subject matter.
Posted by Horizon Charters Guadalupe Cage Diving at 9:29 AM 23 comments: 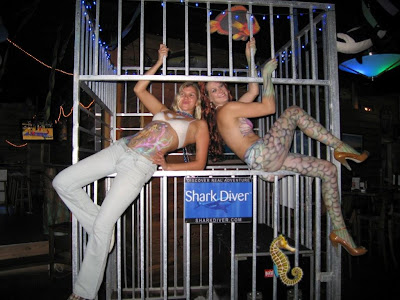 Scotty Gray from Florida's Blue Iguana Charters had a problem only we could solve this month.

That "something unusual" was a Mark V shark cage, the kind that Shark Diver and Shark Divers keeps in storage all over Florida for film and television crews and for our use in the Bahamas and Cuba.

When we asked Scotty what they were planning for the cage he got a little vague, "well, you know, part of the big party this weekend I guess."

The big party featured Guy Harvey himself and an series of well known dive folks, locals, and we're told a few conservation folks as well. After all this is Guy Harvey's place.

Nothing gets held back and apparently our Mark V shark cage, designed for hard encounters with white sharks, tigers, and giant squids...was a hit with the ladies.

Glad we could help out. After all if you have shark cages, use them.
Posted by Horizon Charters Guadalupe Cage Diving at 7:58 AM 5 comments:

It would seem there's a new twist in the widely reported story of a "Monster Shark" that was accidentally caught in Mossel Bay, South Africa.

Turns out the shark was caught some 1600 kilometers away from the Mossel Bay location and "trucked in" for a film crews shoot, contrary to multiple mainstream news reports and emails floating around the Internet.

Thanks to writer Martin Hatchuel who wrote us this week to offer the straight story. Martin is a travel writer for Mossel Bay tourism.

Mossel Bay’s Oceans Research Laboratory last week dissected a massive great white shark which had been trucked into the town from KwaZulu-Natal, where it had drowned after being caught in shark nets.The animal was supplied by the Natal Sharks Board.

“The rumour mill has been working overtime, but the truth is that the shark was brought here so that the dissection could be filmed for a National Geographic television programme called ‘Inside Nature’s Giants’,” said Mossel Bay Tourism’s Marcia Holm.“The series will be shown on both National Geographic and on ’s Channel 4, and features experts from all over the world who trace each animal’s evolutionary history by exploring its internal anatomy.”

According to David Dugan, chairman of Windfall Films, the producers of the series, “When the [first part of] the series aired in the UK, it received universal acclaim in the press and it is now being nominated for many major awards.“A team of researchers and production personnel flew in from New York, London,Durban and to assist scientist Enrico Gennnari, who performed the dissection as part of the requirements for his PhD degree,” said Ms. Holm.

“There are people who want to be frightened by this poor creature, but it really is worth remembering that he was dead by the time he arrived in Mossel Bay,” she said.Mossel Bay has featured in a previous National Geographic production - called ‘Sharkville’ - which showed how, in fact, man and the sharks really do live side by side.“If anything, we’re more of a threat to them than they are to us.”

Ms. Holm said that the risk of shark attack remained low, and that swimmers, surfers and other recreational users of the oceans could mitigate this even further by looking out for - and avoiding - unusually high concentrations of sea birds and fish in the areas in which they were swimming.

“We don’t catch great whites in Mossel Bay as they are protected by the law,” she said.
Posted by Horizon Charters Guadalupe Cage Diving at 3:10 AM No comments: