So what's NOT to like about this latest South African attraction? It's got man eating Salties (crocs), strong looking cages, babes in bikini's, and best of all it yours for a mere $40 bucks.

Yes, now you too can join the good folks at Congo Ranch for a lifetime encounter with a big reptile:

"Daredevils who wish to attempt this adrenaline-pumping feat are slowly lowered into the heated crocodile pool along with 5 large Nile crocodiles and are protected from the predators by a specially designed cage. Guarded by the strong cage, the crocodiles swim around you sizing you up as a tasty snack."

Perhaps they could use a hand at the advertising. This is Africa after all where last we heard 99% of everything there will either kill you or leave you with chunks missing...but they make a tasty vino!
Posted by Horizon Charters Guadalupe Cage Diving at 7:51 PM No comments:

If there's one thing we absolutely "Geek Out" on here at UT it's fresh white shark shark tracking data. Without a doubt the TOPP program-Tagging Of Pacific Predators-is the 300lb Research Gorilla when it comes to white shark data with it's tagging and fresh data feeds to legions of hungry shark fans.

Barbara Block is the research brainchild behind TOPPs from Stanford. Keep this website handy and check in with your favorite sharks as they get tracked all over the Pacific and beyond.

1. Cool data links with close to real time tracking
2. It's absolutely free
3. If you dive with sharks this is the latest intel.

This latest tracking study was done with the help of John O'Sullivan, curator of field operations for the Monterey Bay Aquarium.
Posted by Horizon Charters Guadalupe Cage Diving at 12:04 PM 1 comment:

Lost Season 4-Nothing To Do With Sharks

Perhaps one of the slickest productions ever to hit mainstream television (sorry Survivor) Lost on ABC has captivated viewers with an interesting old school mix of flash backs, plot development, and twisted story lines. Even with the current writers strike in Hollywood the 4th season is rolling out in 2008 and shows few signs of getting old.

While this series has not put a dent in "Reality Television", it has shown the major studios that with a few good writers, a nice beach, and an investment in some quality talent, you CAN produce a hit-and create legions of fans in the process.

For those of you who just cannot wait, here's the official trailer. While sharks do not play a role in this series, we're still hoping that somewhere along the line they make an appearance. These unlikely castaways live on a damn beach after all-so where's sharky?

Posted by Horizon Charters Guadalupe Cage Diving at 8:49 AM No comments: 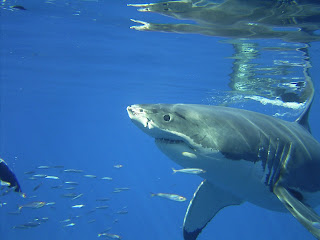 We know that great whites tend to be big swimmers, think of them as the long haul truckers of today's oceans. Minus the beer gut, 8 track tapes, and penchant for Denny's food.

It was a huge surprise though when researchers in New Zealand (yes, they have whitey there too) released their current tacking data on a shark they named "Kerri". Here's the full report with data translation for those that do not speak in meters.

A great white shark has set a long-distance swimming record after travelling 3000km (1864 miles) to the warmer tropical waters of the southern Great Barrier Reef.

While there is evidence of Australian sharks crossing the Ditch, the journey of Kerri - a 4.4m female shark - is the first evidence that it is a two-way process. (14 foot shark)

Kerri was tagged by scientists at Stewart Island in March. Her effort beat the previous record for a New Zealand shark by 200km (124 miles)

Department of Conservation scientist Clinton Duffy said that for years it was thought great whites that ended up in New Zealand were stragglers.

"We blamed the Aussies. But we definitely have our own sharks because they breed here."

Mr Duffy said other results from the tagging project suggested that great whites in the south-west Pacific may comprise a single population.

Three sharks tagged at the Chatham Islands in 2005 all travelled north to subtropical or tropical waters and ended up respectively in New Caledonia, Vanuatu and Louisville Seamounts which is northeast of New Zealand.

"Our tagging results show these sharks can be highly mobile, though they may also hang around seal colonies for several months at a time while feeding on seals."

Little is known about habitat requirements, migratory behaviour or interactions with white sharks elsewhere and the programme is expected to shed light on these patterns.

In 2005 scientists discovered that the sharks could make deep dives, some to over 900 metres (2952 feet) during their migrations and electronic data from the tag could provide more detail.

Attached to the dorsal fin, the tag was designed to detach after a pre-determined time and float to the surface before transmitting data such as location, depth and temperature to a satellite, which emails the results to scientists.

It began calling home on December 18 and, ever since, Niwa fisheries scientist Malcolm Francis' inbox has been filling up with fishy news - he will send it away for decoding in about 10 days, when all the data have been transmitted.

"When they're in the open ocean most of the time they're quite close to the surface but periodically they make deep dives - and we don't know what they're doing down there."

Scientists think the sharks are diving to feed on squid the same way sperm and pilot whales do, or they're listening in for whales' breeding grounds.

"There's some evidence they can attack and kill calves, they can certainly take advantage of a still birth and people have even suggested that the afterbirth could provide a meal."

"At this stage we don't know what route Kerri took, or how quickly she travelled to Australia."

But it looks like the sharks can live anywhere, Mr Francis said.

"Up until eight or 10 years ago people thought they were an inshore coastal species that lived in shallow waters but quite a lot of them head for the tropics and the open ocean, and there is a fair bit of traffic between Australia and New Zealand."

The tagging programme has been a collaborative study by scientists from Niwa, Department of Conservation, Germany's Shark-Tracker and the Washington University.

Posted by Horizon Charters Guadalupe Cage Diving at 8:17 AM No comments: