Ranting for a reason-Smiling at "Da Passion" 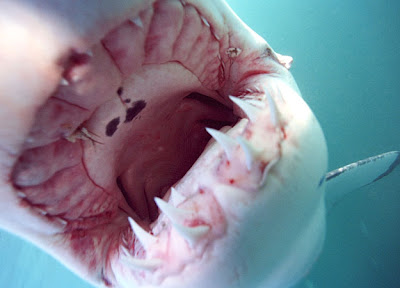 The gents over at Beqa Adventure Divers (Da Shark!) are never short on words when it comes to those who do questionable things with sharks. We also wondered about the merits of this brand of "shark science" having seen it as a stable "go-to experiment" on almost every shark show since the days of the "Flying Sharks":

Sharks have weak bites, say scientists. And who gives a damn, says I.

I've ranted about it before, it just pisses me off to see rare and valuable scientific resources, and brainpower, squandered on such trivia! Does it get any more useless, wasteful and stupid than this?

Is this going to save a single Shark from Extinction?

Because, and I shall never tire to repeat it, in 2009, the only possible justification for any Biological Research is Conservation. Funding is extremely scarce and hard to come by and just cannot be squandered on such frivolous and unnecessary projects, full stop!

Plus, I cannot even begin to try and fathom the ethics of "knocking out" big and threatened Sharks to then electronically stimulate their jaws - for Nothing! Guys, for crying out loud!!! What would you say if somebody traveled to China and did the same thing to an effing Panda???

Shame on you!
Posted by Horizon Charters Guadalupe Cage Diving at 2:02 PM 3 comments: 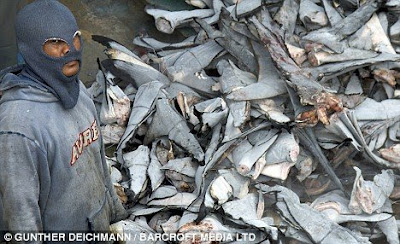 As we have reported this week we attempted to purchase sharks fin from the Alibaba.com web portal to test the effectiveness and real world reality of that press release.

After 7 days and less than 30 minutes of time spent we were able to source over 80,000lbs of dried sharks fin from sellers worldwide. Clearly this represents a massive roll out failure on the part of Alibaba.com and parent company Taobao.com

Taking the lead in educating seller and consumer on their web portals would represent a worthy and admirable leadership stance. We would be the first to commend them.

1. When doing a search for "sharks fin" or any variations thereof Alibaba.com could initiate a pop up with the rules and regulations regarding sharks fin sales. We will suggest they build a "Red Site", listing "by section" items that are banned from sale or trade.

2. When signing up as a buyer Alibaba.com can use this process to direct the buyer to their "Red Site" using consumer drill down sales models they have identified internally.

1. Sellers of all shark products and seafood products should receive warnings that are posted to each sellers site on Alibaba.com automatically. For example if you arrive at seller X's sea product site there's a link to the new "Red Site" with a warning about sharks fin sales.

2. Sellers are given a one strike policy. If sales of "Red Site" items happen and are verified they (seller) are banned forever.

These are a few positive and lasting changes that would have an immediate effect. Taobao.com and Alibaba.com could, if serious about banning the sale and trade of sharks fin, make these simple and industry leading changes within the month.
Posted by Horizon Charters Guadalupe Cage Diving at 1:12 PM 2 comments: 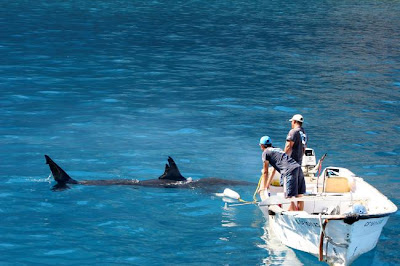 The Humane Society of the United States and Humane Society
International issued a statement today applauding Guam Delegate
Madeleine Bordallo for introducing legislation that would close a
loophole on shark finning.

Bordallo introduced the Shark Conservation Act, H.R. 81, which
provides increased protection for vulnerable shark species from the
disgusting practices of “finning” and overfishing.
“Each year, tens of millions of sharks worldwide have their fins
cruelly cut off at sea and are then thrown back overboard to die a
lingering, painful death,” said Patricia Forkan, president of Humane
Society International. “Shark finning threatens the survival of
essential marine species, and we commend Congresswoman Bordallo for
addressing this cruel and wasteful practice.”

Although shark finning was banned in the U.S. by the Shark Finning
Prohibition Act of 2000, enforcement is complex and a major loophole
allows circumvention of the law. Last summer, the U.S. Department of
Commerce implemented regulations in the U.S. Atlantic Ocean and Gulf
of Mexico requiring that sharks be landed with fins attached to their
bodies, to prevent shark finning. However, the Pacific Ocean has no
comparable regulation, leaving these expansive waters wide open to
abuse.

Last year, the previous version of the Shark Conservation Act (H.R.
5741) passed the House in the 110th Congress, but did not advance in
the Senate before the session was adjourned. The new legislation
contains the same language closing a loophole that currently permits a
vessel to transport fins that were obtained illegally as long as the
sharks were not finned aboard that vessel. The act also requires that
all sharks be landed with their fins naturally attached to their
bodies, creating a clear enforcement mandate applicable in both
oceans.
Posted by Horizon Charters Guadalupe Cage Diving at 9:38 AM No comments:

From RTSea's Blog this week:

Back in August, I posted information about Dr. Susan Lark, an online entrepreneur engaged in selling moisturizers that contained shark squalane (see previous post). Oceana.org took the lead in putting pressure on Dr. Lark and her organization to opt for a substitute squalane derived from olives.

Here's some good news I received today from Elizabeth Griffin, Marine Wildlife Scientist at Oceana.org:
"It's taken nearly a year of constant pressure, but we've finally convinced Dr. Susan Lark to sell cosmetic products containing squalene derived from olives rather than deep sea sharks. More than 15,000 of you contacted Lark, telling her it was unconscionable to sacrifice already at-risk shark populations for the sake of beauty.

First she claimed her product was okay because the sharks used were bycatch of the orange roughy fishery. When we pointed out the error in this logic, she then claimed the source was "sustainably fished" sharks from the Mediterranean. When it became clear that we weren't buying her excuses, or her beauty products, she finally agreed to change her product line. We are happy to report that the first new product is currently in development."

Kudos to Oceana for their dedication, to all those who sent email messages, and to the Dr. Susan Lark organization for finally seeing the light by placing species endangerment ahead of personal beauty.

One step at a time, folks. But we're moving forward.
Posted by Horizon Charters Guadalupe Cage Diving at 9:27 AM 3 comments: