Cape Eleuthera, The Bahamas —To combat the unnecessary killing of sharks, The Shark-Free Marina Initiative (SFMI) launched last month with support from researchers and marinas around the world. The Cape Eleuthera Institute's (CEI) Shark Program, led by Edd Brooks, is now an advisor to the initiative. This project works to reduce the worldwide shark mortality by prohibiting the landing of any caught shark at a participating marina. To encourage support from the fishing industry, the initiative promotes catch-and-release practices to collect data and return sharks to their natural habitat unharmed.

“Sharks are arguably the most endangered group of animals in the world's oceans, a worrying fact given the critical role they play in structuring all marine ecosystems, including the coral reefs of The Bahamas,” says CEI shark researcher and SFMI advisor Edd Brooks, "In the face of this current crisis action is required on every level and the SFMI offers a collaborative way for fishermen and scientists to work together. We are not asking fishermen to stop fishing, only to release the shark as quickly and cleanly as possible."

The Bahamas is home to abundant shark populations where worldwide their numbers are declining. Shark tourism is a crucial component of attracting visitors to the area who bring in $6,000,000 annually to view sharks. A single Caribbean reef shark is estimated to bring in $13,300-$40,000 annually from tourism, with a possible high of $200,000 over the course of the shark’s lifetime. The value of the same shark killed is estimated at $50-$60 when brought to market or nothing if just a photo is taken. SFMI promotes making sharks and their habitats the focus of research, education, and adequate conservation strategies to sustain shark populations, as well as the tourism industry.

The Cape Eleuthera Institute is partnering with nearby Cape Eleuthera Resort & Yacht Club to support this movement to protect an invaluable marine species. “Our surrounding waters and marine life are the Cape’s greatest asset and as a resort we will support every effort to protect this vibrant environment for future generations,” notes Stephen Kappeler, general manager of Cape Eleuthera Resort & Yacht Club. “Becoming a Shark-Free Marina will help us inform visiting anglers to catch and release sharks instead of destroying this crucial member of the ocean ecosystem.”

Hard not to like these guys with a name like GEERG. If you happen to be in Montreal (our all time favorite city) drop by:

The GEERG anti-shark cage will be in Montreal and scuba divers will have a chance to experience the feeling of being in the cage.

The GEERG cage will be at Total Diving’s annual picnic at Kahnawake Quarry on June 20, 2009. Scuba divers will be invited to go in and get an idea of what’s it’s like to observe sharks from behind bars.

This cage will be used, later this Summer, for a National Geographic documentary on the Greenland shark.

GEERG is the Greenland Shark and Elasmobranch Education and Research Group. It’s mission is to study the Greenland shark and other Canadian shark species in their natural environment. GEERG Director Jeffrey Gallant will be with us on June 20 to answer all of your questions. Jeffrey is also the Executive-at-Large of the Canadian Association for Underwater Science.

Total Diving’s annual scuba diving picnic, is a family event to celebrate the beginning of the 2009 diving season in Montreal. During this event, divers have a chance to try all kind of underwater toys at no charge, with a Total Diving dive professional on site to help them. For instance, besides the GEERG shark cage, there will be a complete underwater communication system with full face masks for 2 divers and a surface station, a vehicle recovery system, a hybrid between a dive mask and a dive computer, and a whole lot of gear from Atomic and Bare.

This year’s picnic will be held at the Kahnawake Quarry on the Southshore of Montreal. This quarry is just, now, being re-opened to scuba divers. 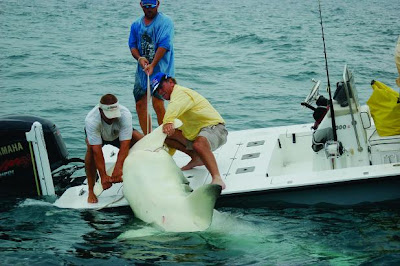 Recreational fishermen in California are well aware of the Marine Life Protection Act Initiative, an ongoing and controversial stakeholder-driven process that is working to put in place a vast network of marine protected areas, including no-fishing zones, along the coast.

But many probably have not heard of the fledgling Shark-Free Marina Initiative, which recently launched a campaign to try to prohibit the landing of sharks in marinas around the world.

The SFMI figures to receive more angler support than the MLPAI, but there will be veteran shark anglers who oppose such meddling.

The SFMI is a response by shark conservationists to the perilous plight most species of sharks face because of rampant overfishing on a global scale, commercially.

"Although the number of sharks killed by recreational fishermen each year is dwarfed by commercial catches, the current crisis facing shark stocks requires action wherever possible," Edd Brooks, a scientist on the SFMI advisory board, said in a news release. "We are not asking fishermen to stop fishing, only asking them to start releasing their catch."

It's a worthy endeavor. Killing sharks for sport is increasingly unpopular and harmful to the marine environment. It's worse than killing marlin and other billfish because sharks are so slow to reproduce.

Luke Tipple, director of the SFMI, said there are only six cooperating marinas -- it began with two marinas in the Bahamas -- but six others have registered and recruitment drives are planned for Florida and California. Essentially, cooperating marinas, which can register on the SFMI website, obtain signage and literature that cautions in bright-red lettering that bringing dead sharks back to port won't be tolerated.

It will be interesting to see whether this will catch on and what kind of reaction it garners.

The End of The Line - New Doco

If you go off the coast of San Diego and drop in a cage looking for blue sharks, you'll spend a lot of time looking for them. Since 2000 the population of adult animals has plummeted. A new documentary looks at this phenomenon in a global perspective using science - not green hysteria to bring home the message:

The End of the Line, the first major feature documentary film revealing the impact of overfishing on our oceans, had its world premiere at the Sundance Film Festival in the World Cinema Documentary Competition. Sundance took place in Park City, Utah, January 15-25, 2009.

In the film we see firsthand the effects of our global love affair with fish as food.

It examines the imminent extinction of bluefin tuna, brought on by increasing western demand for sushi; the impact on marine life resulting in huge overpopulation of jellyfish; and the profound implications of a future world with no fish that would bring certain mass starvation.

Filmed over two years, The End of the Line follows the investigative reporter Charles Clover as he confronts politicians and celebrity restaurateurs, who exhibit little regard for the damage they are doing to the oceans.

One of his allies is the former tuna farmer turned whistleblower Roberto Mielgo – on the trail of those destroying the world's magnificent bluefin tuna population.

Filmed across the world – from the Straits of Gibraltar to the coasts of Senegal and Alaska to the Tokyo fish market – featuring top scientists, indigenous fishermen and fisheries enforcement officials, The End of the Line is a wake-up call to the world.

Posted by Horizon Charters Guadalupe Cage Diving at 7:27 AM No comments: