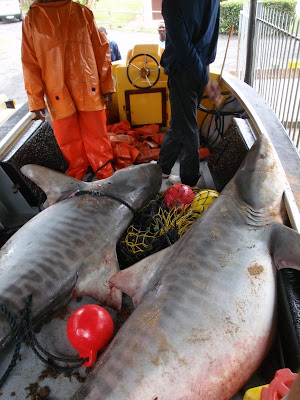 2008 was a horrific year for commercial shark diving operations in South Africa loosing sharks to both poachers and to shark nets.

We witnessed many blog posts detailing the slaughter but no real initiatives put forth to stop it. It is now 2009 and the venerable Andy Cobb has weighed in on this issue. While we do not always agree with Andy's take on things, we do agree that local conservation initiatives save sharks, but they have to start somewhere:

Shark Tourism Full Story
Shark diving in S.A is a huge International tourist attraction and the flagship species are the white shark, tiger shark, bull shark, the spotted ragged toothed shark and a whole host of varied flat sharks. Many visitors are well travelled to dive with sharks and are knowledgeable and passionate about sharks.

The white shark cage diving industry is now just a money making racket by the majority of the operators, the tourists pay large sums of money and are crammed onto a boat, to watch white sharks being fed, and breaking the S. A. law against such activity in a MPA.
Posted by Horizon Charters Guadalupe Cage Diving at 8:06 PM 2 comments:

Had a long conversation this morning with the always excited Melanie Marks CEO of Shark Trust Wines about her adventures in Washington this week at the Obama Inauguration.

Turns out Melanie was front and center at both the swearing in ceremony and with the Washington conservation crowd at the International Conservation Caucus Foundation Ball where Shark Trust Wines were served to a standing room only crowd of conservationists and politico's.

We have been featuring Shark Trust Wines on all our commercial shark diving vessels since the brands inception. As a stand alone wine series they are excellent, as a back end way to message shark conservation efforts, brilliant.
Posted by Horizon Charters Guadalupe Cage Diving at 10:17 AM 2 comments:

On the subject of Bimini, and the recent announcement by the Bahamian Government of a Nature Reserve over a resort development, we thought we would take a quick look at how online conservation video's are now changing the face of conservation efforts.

The multi-faceted Bahamas campaign was in part driven by a series of slick online video's highlighting the impending disaster at Bimini complete with first person interviews with affected locals and conservationists. In the history of conservation efforts this is a relatively new phenomenon, easy and quick eco messaging with extreme effectiveness. Here's one example from the Bimini campaign, as a force multiplier for education and as a conservation tool these video's are key to conservation efforts.

Once again Kudos to all those who did the heavy lifting here, this was an amazing turnaround:

Posted by Horizon Charters Guadalupe Cage Diving at 9:52 AM No comments: 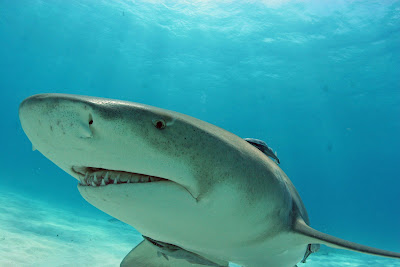 Success in the Bahamas. The CAPO Groups efforts to completely tear down the last mangrove lemon shark nurseries in the Bahamas was met with a storm of protest and seemingly deaf ears from the Bahamian Government who, for all intents, were more interested in the financial side of the new mega resort development in Bimini.

The campaign to save this site was driven by old fashioned pressure, letters, and a very slick series of online video's posted to You Tube and other eco sites. Today the Bahamas announced they will be creating a Natures Reserve in the area. Kudos to the many who started this project and who carried it through to this day, and to Doc Gruber and his team as well. As a template for the creation of other marine sites in the Bahamas this eco challenge was one for the books:

The Bahamas government has created a marine reserve off the island of North Bimini, preserving critical mangrove habitat and a shark nursery that had come under threat from a resort there.

The reserve, which will be protected from most fishing and other "extractive activities," is home to endangered species such as the Nassau grouper and the Bimini boa, as well as a vibrant nursery for lemon sharks.

The decision -- approved by the Bahamas cabinet Dec. 29 but announced last week -- is a setback for the Bimini Bay Resort and Marina, which has been clearing some of the island's mangroves to build a hotel, a golf course, a casino and two marinas, some of which have already been constructed.

Prime Minister Hubert Ingraham had initially considered establishing the reserve in the late 1990s, but his party lost power in 2002, and the development proceeded. Ingraham's party won back control in 2007.

Philip Weech, director of the Bahamas Environment, Science and Technology Commission, said the government concluded that the mangroves on North Bimini's North Sound contribute to the nation's fisheries as well as tourism. It is vital for the fisheries in the area to retain the ecosystem in that area," Weech said, adding that the reserve "helps us also to deal with the issue of climate change, flooding, storm surge and the biodiversity that's there."

Under the plan, the government will allow traditional land crabbing in the protected area, along with limited catch-and-release bonefish fishing.

Samuel Gruber, a University of Miami professor who has studied lemon sharks for nearly 20 years as head of the Bimini Biological Field Station, called the creation of the reserve "miraculous."

Gruber and four colleagues published a scientific paper last year showing that dredging in the North Sound for the resort construction in March 2001 had cut the first-year survival rates of juvenile lemon sharks there by more than 23 percent.

Ellen Pikitch, executive director of the Institute for Ocean Conservation Science at Stony Brook University, who has collaborated with Gruber on his shark research, said the Bahamas' decision is significant because mangroves represent "essential fish habitat, and they're dwindling all over the globe."

The Bimini Bay Resort and Marina did not return calls seeking comment yesterday. Weech said any further development, including the planned construction of a golf course, would be allowed only if it did not jeopardize the reserve.

Demian Chapman, a Stony Brook professor who has also conducted research in Bimini, said the golf course "would be a disaster" because it would damage the reserve's water quality.

"It's just like having a sewage plant next door," he said.

Posted by Horizon Charters Guadalupe Cage Diving at 9:24 AM 1 comment: