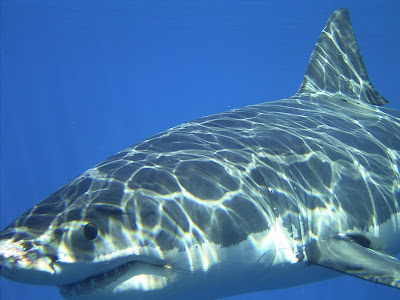 For the second year in a row 2007 and 2008 MSNBC has named Shark Diver one of the Top 10 Extreme Vacations on the planet.

We've found 10 extreme vacations to get your heart racing and, just in case you aren't quite ready to swim with the sharks, we've also included a similar — albeit less-adrenaline-pulsing — alternative with each of our top adventure-filled trips

6. Shark diving
If "Jaws" didn't permanently scare you out of the water, pack your gear and go deep-sea diving with the sharks off the coast of Cape Point, South Africa. Apex Shark Expeditions runs day trips into False Bay (some 30 minutes from Cape Town) between November and June, inviting you to swim for over an hour with Mako and blue sharks without anything but your wet suit between you and their fins.

Low-adrenaline alternative: Check out the world's largest predatory shark — the great white — in the Pacific waters around Mexico's Isla Guadalupe; Shark Diver outings put you underwater — and safely behind bars — in a secure steel cage.

Ahhh, that cold, clean refreshing mass media. Thanks to MSNBC and Shermans Travel for this honor, and thanks to all our divers who made it so!
Posted by Horizon Charters Guadalupe Cage Diving at 7:18 AM 1 comment: