On a recent media swing through You Tube we came across this eco tourism "gem". It's always important to keep a predators food source on top of your head when promoting wildlife tourism.

This particular operation is set to expire any day now: 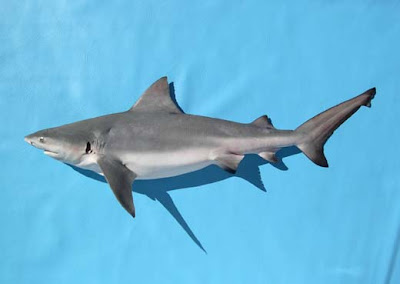 Without a doubt the recent and horrific shark attack on a swimmer in South Africa last week ignited several wide ranging debates in the press about everything from shark culling, to raw sewage discharge, and even the controversial use of shark nets.

Herald Online reporter Dineo Matomela should be noted for his coverage which looked systematically into the causes, the sharks, and the over all shark situation in the region.

Makes for facinating reading and a template for non sensational shark journalism-tackling the issues of humans and sharks in a thoughtful manner:

A ZAMBEZI shark was responsible for attacking and killing a Port St Johns lifeguard at the weekend, Natal Sharks Board head researcher Geremy Cliff said yesterday.

He said warm waters along the Eastern Cape coast in summer attracted the sharks. Seasoned lifeguard Sikhanyiso Bangilizwe, 27, was attacked by the shark on Saturday afternoon while swimming with a friend at Second Beach.

He was bitten on the shoulder, right arm, back and buttocks. Cliff said an examination of Bangilizwe‘s body had established that a Zambezi (bull) shark had attacked him. 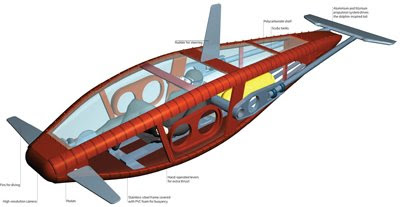 The Lumocet is a new pedal powered wet sub that will be making it's debut soon on a proposed transatlantic voyage. Think Wright Brothers with a side of Indiana Jones meets McGuyver:

Inventor Ted Ciamillo plans to pedal nearly 2,000 nautical miles from the Cape Verde islands to Barbados at a depth of around two metres, surfacing at night to sleep under a tent erected on top of the sub, according to New Scientist magazine.

Editors Note: Every once in a while along comes a tech storyline made for television. If these guys make it even half the distance they are planning the end result will be a thrill a minute programming-cue the adventure, cue Nat Geo.
Posted by Horizon Charters Guadalupe Cage Diving at 11:06 AM No comments:

File this post under shark "awareness". After news this week that a research team on South Africa's Breede River caught and tagged what is now the largest Bull shark on record, locals who swim and fish in these waters are quoted as seeing this as a good thing:

Cape Town - Cool-headed Witsand residents have accepted their toothy marine neighbour with some pride and are not about to be scared away from their beloved Breede River by any shark, big or small, they say.

Witsand hit the headlines this week after a huge four-metre female Zambezi shark, heavily pregnant with at least four pups, was caught about 5.5km upriver from the estuarine fishing village. Locals said they were more amazed than frightened at the appearance of the shark, estimated to weigh around 650kg.

For some it was proof of what they had believed for years, after regular sightings of large shadows under the water and mysterious disappearances of fish from fishing lines.

Complete Story
Posted by Horizon Charters Guadalupe Cage Diving at 8:30 AM No comments: