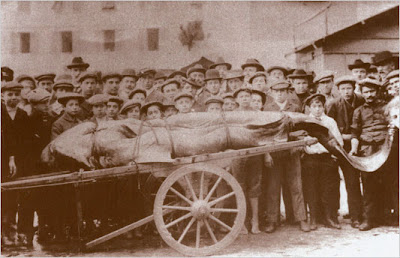 Word rapidly spread and conservation action began in the form of the Blue Heart Society.

Last week another voice has surfaced, Steven Spencer, who, in rather pointed open letter is suggesting that local dive shops are partially to blame for the actions taken by fishermen.

His letter serves as a wake up call to dive shops and new shark diving operations including those who would guide these nascent operations to best practices.

Without a strong conservation program in place on the opening day of shark operations, regional shark populations run the risk of "commercial promotion without representation".

More from Da Shark in Fiji.

My name is Steven and i am writing in relation to some horrific Shark killings that have been happening close to the shores of Playa Del Carmen Mexico. You may have already heard something of this news but i am writing because all of the news that i am hearing and reading is very biased and largely untrue so i wish to write a true account to the best of my knowledge about these incidents and what has led to them.

I do not know if there is something that your organisation, or any organisation that you know can do about these occurrences, but i feel the need to write in true detail of what is happening as i am sure that if anything can be done then you will know better than i the people that could do something.

Playa Del Carmen is a tourist area that has grown considerably in the past decade. I have been diving there for 7 years, i have done many dives there as i have spent 5 months there every year for the past 7 years.

Bull Sharks visit these shores during the months between November and March. In my first 5 years of diving there i frequently saw groups of 2 to a maximum of 5 BullSharks in various dive sites, mainly Tortugas, Pared Verde and Barracuda. BullShark sightings were frequent during these months if diving regularly but could not be guaranteed.

Eventually one dive store called ‘Phantom divers’ began to feed an area regularly close to shore near a dive site called ‘Jardines’ and eventually the sightings of these BullSharks were very rare in other locations.

Phantom diveshop then began taking divers to the fed area close to Jardines and feeding these BullSharks whilst wearing a chainmail suit. BullSharks would gather there everyday during these months every year and eventually every other divestore in town hypocritically began running ‘BullShark dives’. I state hypocritically because every other diveshop spoke of their disliking of the Shark feeding but continued to make very good money from these dives.

Anyway, the BullShark is not a protected species in Mexico and local fisherman have always killed 2 or 3 a year but now everything has all come to a very sad situation. I am aware of one true report where 9 were killed by a fisherman in one day and other reports have suggested that 25 were killed in 3 days. During my 5 months every year in Playa i would dive most days and i would estimate that there wouldn’t be much more than 50 BullSharks that visit these shores each year as i was frequently seeing the same ones, i only counted approximately 20 different ones. If this is the case then it is a large percentage of decline of this species there.

I am therefore 100% sure that because of this feeding programme it has herded them into one area making it very easy for them to be fished and slaughtered by local fisherman who now have the knowledge of their whereabouts. 2 or 3 killed a year before, and 9 killed in one day proves this is no coincidence and they would therefore have a better chance of survival if they were spread around as before.

Phantom divers is currently fighting for the rights for the BullSharks not to be fished for at this certain feeding point during the months that they visit the area, stating that the BullSharks congregate there to give birth, this information i know to be incorrect. They congregate there for the food that is fed to them and for no other reason.

It is obvious that the only interest in Phantom divers minds is the proffit that can be made from the BullSharks.

My interest is for the survival of these magnificent creatures and i hope by voicing my opinions, whether loved or hated might help towards this.

I thank you for your time in reading this and thank you for passing this information on to anyone who might be able to assist with this sad situation and if there is anything else i can do i would be happy to.

Steven Spencer.
Posted by Horizon Charters Guadalupe Cage Diving at 9:03 AM No comments: 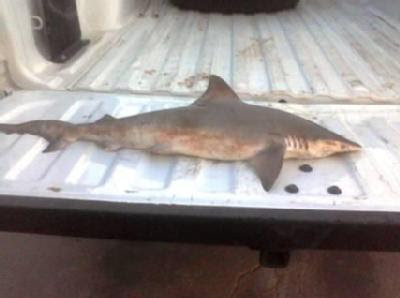 Arizona Department of Fish and Game are offering a reward for information leading to the arrest of individuals who planted a live or dead shark in a local canal.

This 32" specimen was discovered in West Main Canal in Yuma near First Street and 14th Avenue on Nov. 20.

Department staff members suspect this shark was first live caught and then transported from San Diego, California.
Posted by Horizon Charters Guadalupe Cage Diving at 8:43 AM No comments: